IHC formed a five-judge bench headed to hear the case 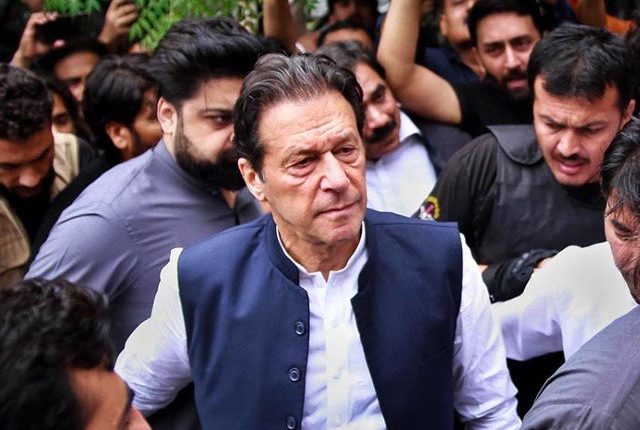 The Islamabad High Court has formed a five-judge bench headed by its Chief Justice Athar Minallah to hear the contempt case for threatening a female additional district and sessions judge.

The court will hear the case on August 31. The contempt proceedings were initiated against the PTI chief on the notice of the registrar’s office.

Sources told that the senior lawyer has given consent to representing the PTI chief in the contempt case.

Khan is a senior PTI leader. He was main counsel in even in the Panamagate case. Later he was replaced with Naeem Bukhari. Later, he disassociated himself from the PTI after the filing of a presidential reference against Justice Qazi Faez Isa.

Initially, a three-member larger bench headed by Justice Mohsin Akhtar Kayani had issued a show-cause notice to Imran for contempt of court after hearing Advocate General Islamabad Jahangir Jadoon in the initial hearing.

To include more judges on the bench, the matter was sent to the IHC chief justice. After the IHC CJ returned from his leave, he formed a bench for the case that he himself would head.

The registrar’s office has already sent a show-cause notice to Imran at his Bani Gala residence, in which it has been asked that he should appear before the IHC on August 31 and explain why contempt proceedings should not be taken against him.

Imran, while addressing a recent rally at Islamabad’s F-9 park, had alleged that Judge Zeba Chaudhry knew that incarcerated party leader Shahbaz Gill was tortured, but she did not release him on bail. He had threatened to take action against the judge and the Islamabad IGP.

Imran was also booked in a terrorism case on the complaint of Islamabad Saddar Magistrate Ali Javed for threatening the judge.

The FIR, a copy of which was available with The Express Tribune, was lodged with the Margalla police station. The FIR carried Section 7 of the Anti-Terrorism Act.

The FIR was lodged hours before another Islamabad police station received a written complaint from a resident of G-11/2 for lodging a case against Imran over making hate-speeches, and inciting rebellion against the army, police and judiciary.

The FIR lodged by Margalla police had read that the PTI chief threatened the additional sessions judge of Islamabad with a view to terrorise high officials of the police and the judiciary, so that they could not fulfil their duties and refrain from taking action against the PTI due to fear of Imran.