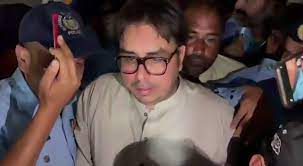 Islamabad: The Islamabad police conducted a raid on incarcerated PTI leader Shahbaz Gill’s apartment at Parliament Lodges in the federal capital and recovered pistol, satellite phone, passport and other devices from his residence.

The police searched the apartment in presence of media and Gill was also brought along during the raid.