Prime Minister’s Telephone Call to President of the UAE 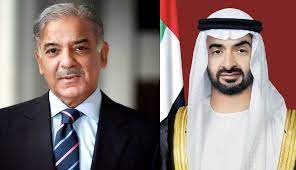 Reaffirming the fraternal relations between Pakistan and the UAE, the two leaders reiterated their mutual commitment to further expand and diversify special bilateral relations.

Prime Minister Muhammad Shehbaz Sharif also paid rich tributes to Sheikh Zayed Bin Sultan Al-Nahyan, founding President of United Arab Emirates, for his role in laying the foundations of close and fraternal relations between the two countries. Sheikh Zayed Bin Sultan Al-Nahyan was a regular visitor to Pakistan and also financed various philanthropic projects in Pakistan in the social sector. Sheikh Zayed Hospital is the prime example for his services to Pakistan. His name will be remembered for his philanthropic causes.

The Prime Minister also thanked the President of the United Arab Emirates for the financial and material support to Pakistan after the recent devastation caused by floods in Pakistan.

The President of the UAE reciprocated the greetings from the Prime Minister and extended best wishes to the people of Pakistan.

The Prime Minister extended an invitation to the UAE President for a visit to Pakistan, which His Highness Sheikh Mohamed bin Zayed graciously accepted.

Pakistan and the UAE enjoy close fraternal ties for five decades that are rooted firmly in common beliefs and shared values and culture. The UAE is Pakistan’s largest trading partner in the Middle East and a major source of investments.