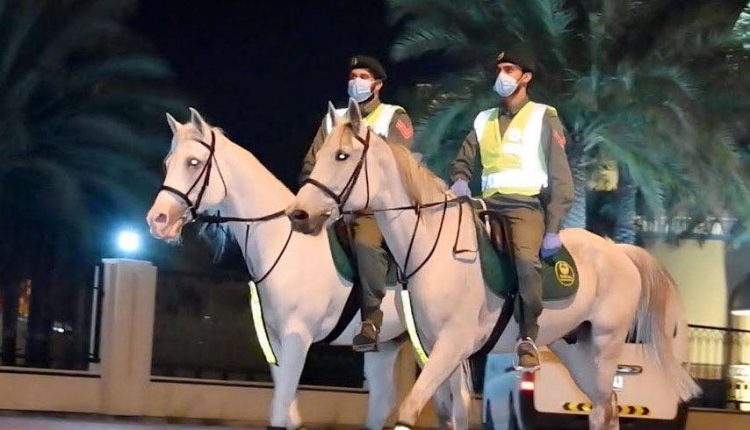 UAE: The Dubai Mounted Police Station has deployed 1,182 security patrols over the 71 Individuals Arrested last eight months, which have led to the arrest of 71 wanted individuals, issuance of 352 fines, and seizure of 915 vehicles.

Director of Dubai Mounted Police Station, confirmed that horses have a fair share in enhancing the safety and security of community members and play a pivotal role in spreading peace. He added that the Dubai Mounted Police Station has a variety of tasks, including providing security coverage for areas of jurisdiction, securing events, and building strong community relations. Maj-Gen. Al Adhb further noted that Dubai Mounted Police have participated in various activities this year, including securing sports competitions and 71 Individuals Arrested matches. In coordination with partners, they also organised a therapeutic horse riding programme for people of determination. The unit also has conducted horse riding training sessions for male and female cadet officers of the Dubai Police Academy.

The director of Dubai Mounted Police Station added that they play a significant role in enhancing the safety and security of Dubai’s neighbourhoods. He recalled an incident earlier this year when two police officers from the Dubai Police Mounted Police Station uncovered a criminal gang and foiled their bid to carry out thefts in the emirate. The Dubai Mounted Police also participate in various festivals and events, including securing venues, stadiums, and performing shows and parades.

“We always get approached by people, especially children” “Everyone loves horses. They want to know about the majestic creatures, so they come up and ask questions. Cops on horses are less intimidating, and people feel safe around them,” Maj. Gen. Al Adhb stated.

He also noted that they had gifted three horses from Dubai Police’s stables to three children, who joined the training summer programme at Dubai Police as ‘Safety Ambassadors’.

“The three students, Safi Ali Al Naqbi, Sultan Khalid Al Shamsi, and Meera Ali Al-Haj, were presented with the three horses after they showed passionate enthusiasm and a keen interest in attending to horses during their training at the Dubai Mounted Police Station in Al Aweer” Maj. Gen. Al Adhb confirmed. 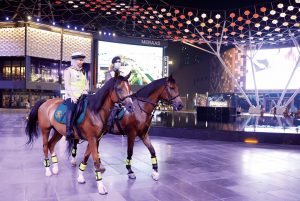 Today, the Dubai Mounted Police Station has 100 horses that roam the city’s streets to ensure safety and tranquillity and spread joy among its people.

Major Dhahi Salem Al Jallaf, Deputy Director of Dubai Mounted Police Station, indicated that one of their pivotal work aspects is veterinary and horse care. “Our veterinarians and nurses work tirelessly to ensure the horses’ safety and wellbeing at all times, treat their injuries and follow up on their health and immunisation schedule,” he noted.

Major Al Jallaf confirmed that their equine rehabilitation programme had made remarkable achievements over the past 15 years. The programme includes rehabilitating and training racehorses and enabling them to participate in events, shows and festivals.

Major Al Jallaf revealed some of the Station’s innovations, including an engineless bicycle for training horses equipped with front and rear fenders for docking horses kicks during training. In addition, the Station’s has developed a water spray device and a rubber-balls throwing machine used to create scenarios that simulate riots.
Major Al Jallaf said they have also developed a horse-training armoured vehicle equipped with front and rear fenders that fuse with the horses to train them on push and anti-riot response. The armoured vehicle is also fitted with an artificial smoke device to train horses on fire outbreak scenarios during riots, loudspeakers and customised front and rear cameras.

Imran Khan Fails To Appear Before JIT For Third Time