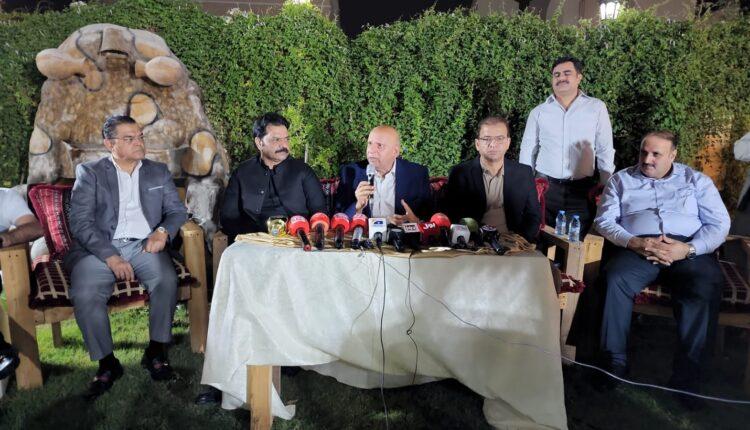 Staff Report
DUBAI: Former Governor Punjab Chaudhry Mohammed Sarwar has announced to form a “Grand Overseas Club” to address the grievances of Pakistani expats through a “One Window – Overseas Smart App”.
Chaudhry Mohammed Sarwar was addressing the inaugural introductory ceremony of the Grand Overseas Club in Dubai along with prominent Pakistani businessmen and newly elected president of the Grand Overseas Club UAE Chapter Malik Munir Awan and former Pakistan hockey star Jaffar Hussain, who is elected as the junior president of the club.

The former governor said that the launching ceremony of Grand Overseas Club will be held on August 14 this year and the club would have branches in more than 60 countries.
Referring to the current economic situation of Pakistan, Chaudhry Sarwar acknowledged that the foreign exchange of Pakistani expats can bail out the country from the debt of International Monetary Fund (IMF) and other financial institutions.
“The idea of a Grand Overseas Club came up during the pilgrimage of Holy Madina and prayers at Masjid-e-Nabawi (PBUH),” he said, adding that some overseas Pakistanis approached him at the Prophet’s (PBUH) mosque for their problems in the homeland.
He believed that the Grand Overseas Club would be helpful to resolve expats’ issues with the association of the club’s team and modern technology.

Chaudhry Sarwar said that Overseas Pakistanis would be able to register their complaints on the smart-app of the Grand Overseas Club that would be launched soon.
He assured that the Grand Overseas Club would become active immediately after receiving the complaint through smart-app. “The club’s team will follow up the case and provide guidance to the expats”, the former governor stated.
While replying to the questions of the journalists, Chaudhry Sarwar said that the website, smartphone app and digital social media accounts of Grand Overseas Club will be launched soon.
He vowed that the club would, in fact, act as a bridge between overseas community and various Pakistani institutions.
The former Punjab governor clearly stated that he had been an overseas Pakistani so he is well aware of the problems of the countrymen living abroad.
Referring to his tenure as governor of Punjab, he said that he had always strived to address the problems of overseas Pakistanis and would continue to do so.

Prominent Pakistani businessman Malik Munir Awan has been elected as President of the Grand Overseas Club UAE. Moreover, businessman Gulfam Khan has been elected as Vice President, Yasir Tanoli General Secretary and Ali Jadoon as membership commissioner.
The newly elected presidents and other officials of the seven states of the United Arab Emirates were also announced on the occasion. The officials of overseas chapters of other countries would also be announced soon.