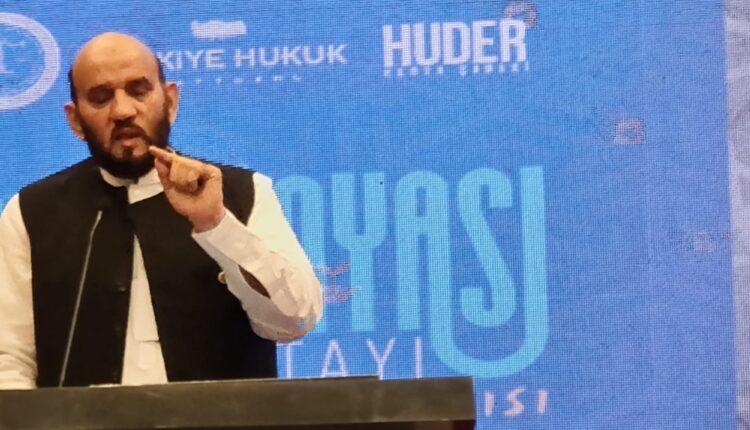 The conference in its declaration concluded the necessity ensuring the human rights mechanism to be activated; international conventions to be made functional; international instruments to be impartially implemented for all people of the world; justice to be internationally recognized and uniformly applied to all; and that the United Nations should fulfill its pledges made to the people since its inception.

The conference also discussed the issues of Palestine, Kashmir, Ukraine, Yemen, Sudan, Rohingya Muslims, Afghanistan, Egypt, Syria, East Turkistan, etc. The resolution adopted at the end of the conference called on the international community to play its role in giving Kashmiris and Palestinians the right to self-determination in accordance with the UN resolutions, and urgently preventing all kinds of human rights violations in Kashmir.

Dr. Ghulam Nabi Fai, Secretary General of World Kashmir Awareness Forum presented a 20 pages research paper on the subject, “The concept of self-determination and the issue of Kashmir.” He said that the aim of this paper was not to appeal the conference participants’ religious or ideological sympathies, nor to their leanings towards either India or Pakistan, but solely to their conscience, human concern, and moral rectitude.

Dr. Fai added that the principle of self-determination and the maintenance of international peace and security are inseparable. For example, the denial of this right to self-determination to the people of Kashmir has brought India and Pakistan to the brink of nuclear catastrophe. The applicability of the principle of the self-determination to the specific case of Jammu and Kashmir has been explicitly recognized by the United Nations. It was upheld equally by India and Pakistan when the Kashmir dispute was brought before the Security Council in 1948. Since, on the establishment of India and Pakistan as sovereign states, Jammu and Kashmir was not part of the territory of either, the two countries entered into an agreement to allow its people to exercise their right of self-determination under impartial auspices and in conditions free from coercion from either side. Unfortunately, these resolutions remain unfulfilled with catastrophic consequences.

It suits the guilty party, India, to quibble over the issue and make it look as abstruse and forbiddingly intricate. The false intricacy, in turn, provides an alibi to the world powers to temporize and postpone a just and fair settlement of the dispute. The cost is imposed on the people of Kashmir – in countless inquires and deaths and intense suffering, Fai alerted.

Dr. Fai cautioned that India’s occupation of Kashmir has been left undisturbed by the international community, even though its validity has never been accepted. At no stage, however, have the people of Kashmir shown themselves to be reconciled to it. Kashmir’s record of opposition to its annexation by the Indian Union, can by no standard be reckoned as less genuinely demonstrated than that of countries of Eastern Europe under the dominance of the Soviet Union and recently revealed during the Ukraine crisis. But while the popular revolt in the countries of Eastern Europe were and now in Ukraine is observed and reported by the international media, that in Kashmir has remained largely hidden from the world’s view.

“It is hard to understand why, contrary to its traditional principled stand on the Kashmir dispute, the world powers have been in recent years treating the problem as if it were an unchartered terrain about which no road map exists. The United Nations has at its inception devoted immense labor and thought, extending over a hundred meetings of the Security Council with active U.S. participation, to its solution. The fact cannot be dismissed that the terms of settlement the United Nations worked out did elicit the signed agreement of both India and Pakistan. It may be admitted that those terms seem to be in need of revision in the light of current or emergent realities but their basis, the consent of the people of Kashmir, remains inviolable. Neither pragmatism nor morality would sanction the setting aside of that basis,” Fai emphasized.

Fai demanded the unconditional release of Yasin Malik who is the most popular political resistance leader of Jammu & Kashmir. Yasin Malik is not a terrorist, Fai said as he quoted a prominent journalist of South Asia and former India High Commissioner to United Kingdom, Kuldip Nayar who called Yasin Malik the leader of non-violence in Kashmir. Bharat Bhushan, another Indian journalist said that Yasin Malik is trying to build a constituency for peace in Jammu and Kashmir through non-violence.

The nation of Kashmir knows that Yasin Malik has dedicated his life for peaceful resolution of Kashmir dispute. Even Dr. Manmohan Singh, then the Prime Minster of India invited Yasin Malik for a sole purpose of initiating peaceful dialogue between India and Pakistan. It will be travesty of justice if these facts are ignored by the Supreme Court of India during the hearing on May 25, 2022, Fai added.

Abdul Rashid Turabi, former parliamentarian of Azad Kashmir assembly thanked the Government of Turkey for standing with the people of Kashmir at all times. Pakistan, he said, has always supported the Turkish position in Cypress, Azerbaijan, Syria and elsewhere. And Turkey has responded not only by becoming symbol of humanity during the crisis in Pakistan but also in Azad Kashmir.

Abdul Rashid Turabi added that the grave situation in Kashmir demands that it could be brought to the attention of the Security Council. Whether this could be done successfully depends on the attitude and policies of the permanent members, but they should be left in no doubt that any failure to resolve the problem could lead to serious disorders throughout the South Asian Subcontinent and possibly to yet another war between India and Pakistan, with incalculable consequences for the whole world, since both states now have nuclear capabilities.

Dr. Waleed Rasool, Professor at Riphah University, Islamabad said that Kashmir dispute has legitimacy as per UN resolutions and international law. Therefore, India cannot misinterpret and misrepresent the situation in Kashmir unilaterally. He asked the conference attendees to uphold the legal interpretation of the justice everywhere. Lawyers are the guardians of the justice system not only domestically but also globally. However, their responsibility increases manifold when it comes the justice system of the people of occupied lands, like Kashmir.

Dr. Rasool emphasized that India killed more than 100,000 innocent civilians in Kashmir but she could not kill the sentiments and aspirations of the people for freedom and justice. Indian government is trying its best to bring the demographic changes in Kashmir to change a majority community into a minority one, Rasool Warned.

Jurists all over the world in general and in Turkey in particular can also play a vital role in highlighting the situation in Kashmir while our whole leadership is behind the bars for so many years. Turkey is all season friend of Pakistan and have their influence when it comes to multilateral diplomacy. Turkey can also play a role at UN Human Rights Council to high light the human rights situation in Kashmir and specifically to urge the world community to intervene to save the life of Yasin Malik who is in notorious Jail of India for the last three years.

Advocate Nasir Qadri, Chairman, Legal Forum for Kashmir said India’s occupation forces have occupied 10,54, 721 Kanals of land in Indian occupied Kashmir. On this land, 761 Indian army camps have been established in Kashmir. The structure and placement of the camps enforce contact between women, children and occupying forces and create context in which gendered violence is regularized.

Qadri added that the recent upsurge in summoning people in police stations and counter-insurgency torture centers disabling social media accounts came as a by-product of the ‘politics of fear’ raising voices against the Indian state and brutalization of Kashmiri bodies, to visit police stations in one such example of the ‘controlling ‘ the flow of information.

Khalid Mahmood khan, member of Board of Directors of International Lawyers Union said jurists understand the dynamics of international law and the significance of world order. None other than jurists can understand the nuances how a powerful nation can interpret and misinterpret the human values.

Jurists are the voice of the oppressed who have no representation in any legal system, therefore, they must act and work for humanity, like in Kashmir where the occupational forces had been given license to kill at will. The Indian forces have been equipped under domestic draconian law and have no accountability under the law, Khalid added.