Legal action against officials who allowed construction on riverbank in Swat: COAS 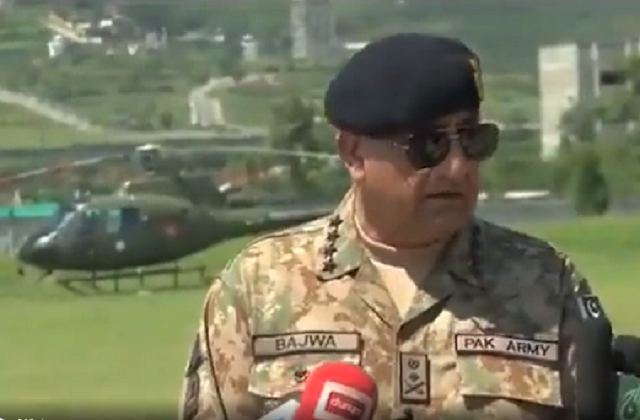 Chief of Army Staff (COAS) General Qamar Javed Bajwa said on Tuesday that legal action should be taken against officials who allowed construction on riverbank in Swat as many hotels washed away by raging floodwater.

He made these remarks during his visit to the flood-affected areas of Swat to get an ‘on-ground’ update regarding the evacuation and relief operations focused on the people stranded in Kumrat, Kalam and surrounding areas.

The army chief held a brief interaction with the media representatives at Kanju Cantt Helipad. He said that the assessment of flood damage is yet to be done and the survey for assessment of losses will be done jointly by the district administration, provincial governments and the army.

Gen Bajwa further said that there has been a lot of damage caused to bridges and hotels in Kalam valley.

He said that a similar disaster hit Swat in 2010 floods. “However, negligence was shown yet again by the authorities who allowed construction of structures and hotels on the vulnerable sites” the COAS added. “Legal action should be taken against those responsible.”

The COAS said that the most important task at the moment was the opening of Kalam Road which he expected to be reopened in next six to seven days.

Gen Bajwa said that people trapped in Kalam are being rescued, and there is no crisis situation in the valley now.

He said that an overwhelming response was being received to the appeal for relief against the flood. At present, various welfare organisations, political parties and the Pakistan Army have opened their own relief centres.

The army chief said that a headquarters has been established on the pattern of NCOC where the aid data will be collected. The minister for planning and development will send assistance wherever needed based on the data from the headquarters.

Gen Bajwa said that citizens have donated tons of rations for the flood victims. “However, the real problem is not of rations but of tents.”

He said efforts were underway to procure tents from other countries while tents are also being provided by the army.

Sindh and Balochistan, the COAS said, need more tents. He further said that aid flights have started arriving from the UAE, Turkey and China while flights are also coming from Saudi Arabia and Qatar.

Apart from this, donations in the form of cash grants will also be received, he added.

Gen Bajwa said that friendly countries have never left Pakistan alone in a difficult and they would not leave the country alone this time as well.

He also appreciated the response of overseas Pakistanis with respect to contributions for the flood victims.

Speaking about the rehabilitation efforts, the army chief prefab houses will be provided to the flood victims.

He said Swat was not facing a major crisis like Sindh and Balochistan where four-feet of rain water is accumulated and entire villages have been wiped out due to floods.

Tourist families are also among the victims brought to Kanju cantonment, he added.

The COAS spent time with evacuated people who thanked the Pakistan Army for reaching out once they needed it the most and bringing comfort not only to them but their families back home who eagerly awaited their safe return, the ISPR said.

He also undertook aerial reconnaissance of the extent of damage caused by floods and relief efforts of army troops at various locations including Kalam, Bahrain, Khwazakhela and Matta areas of Swat.

He appreciated Peshawar Corps for its effective and timely response during crises and for saving precious lives.

The ISPR said that 82 helicopter sorties have been dispatched to flood-affected areas of the country for rescue and relief operations.

The ISPR added that 27 helicopter sorties have evacuated 316 stranded individuals and delivered 23.753 tonnes of ration and relief items over the past 24 hours.

Moreover, 3,540 ration packets and 250 tents have been distributed among flood victims during the last 24 hours. The military’s media wing added that 51 free medical camps have also been established, in which 3,3025 patients have been treated.

The Army Flood Relief Coordination Center is functioning under the Army Air Defence Command with a mandate to coordinate rescue and relief efforts in synchronisation with stakeholders at the army level.

A total of 217 flood relief donation collection centres have been established all over the country, for the collection and distribution of relief goods.

PCB puts up Pak vs Eng series tickets on sale