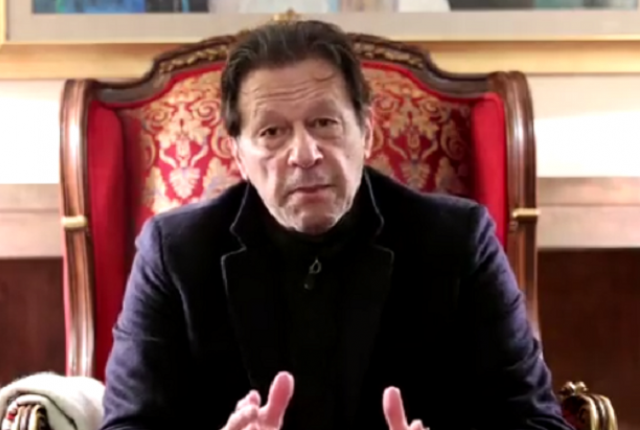 Lahore: Former Prime Minister and Chairman of Pakistan Tehreek-e-Insaf (PTI) Imran Khan has said that he is not afraid of dying and going to jail, he will fight till his last breath.

Speaking on the arrest of Fawad Chaudhry, former Prime Minister Imran Khan said that electricity prices have doubled since the departure of our government. In April, when our government left, the price of flour was Rs 65 per kg. , PDM pushed the country to destruction, inflation in the country is due to this cruelty and injustice.

Imran Khan said that the judiciary and lawyers should stand up for the rule of law, they are not afraid of death and going to jail, when Allah’s decision is made, time does not go back and forth. Protect the fundamental rights, if the judiciary did not stand, Justice Munir was not forgotten by history, judges should save democracy, and protect the rights of the people.

Questioning why the Election Commission of Pakistan (ECP) chose Mohsin Naqvi as the caretaker chief minister of Punjab, he said that it is the electoral body’s responsibility to hold free and fair elections in the country as per Article 218(3) of the Constitution.

“Did you not know about his background? Did you not know he had a major role in regime change operation against PTI? He was very active to oust us. His channel was also involved in propaganda against us.”

He said, The most important thing is that the current chairman of NAB, Aftab Sultan, had made an inquiry against Mohsin Naqvi in ​​which case Mohsin Naqvi had returned 3.5 million rupees to NAB.

The former PM said that the current regime wanted to silence him, therefore, it was taking steps against his party. “What had Azam Swati done? What he tweeted was his opinion. They stripped him naked. Made an objectionable video of him,” he added.

He said that the entire plan has already been made. Mohsin Naqvi is not trying to conduct a transparent election, but he has come to repeat the scenario of Karachi’s municipal election in Punjab, PPP won despite not having a vote bank, we are going to court with this case.

Imran Khan said that with the arrival of Mohsin Naqvi, it became clear that he does not intend to hold an election. According to the constitution, the date of the election must be given within 48 hours of the end of the assembly and the election must be held within 90 days. We have only two ways,  either we go to the judiciary or come to the streets, the judiciary has a huge responsibility.