People of Pakistan are our priority , won’t spare to assist them in difficult time: COAS

we won’t rest until each one of flood affected is rehabilitated: Bajwa 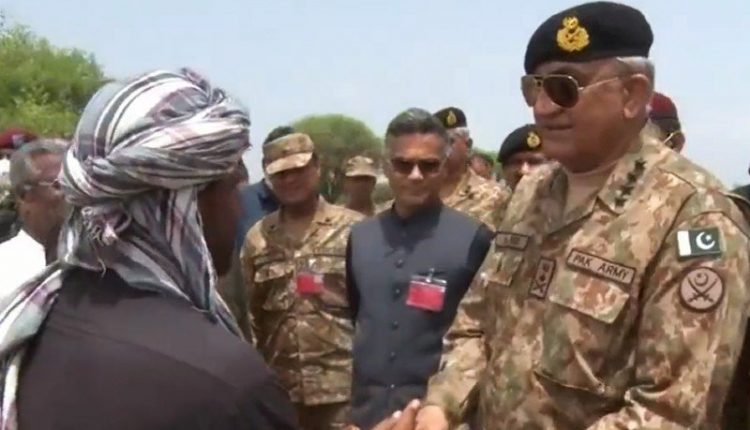 Chief of Army Staff (COAS) General Qamar Javed Bajwa on Saturday vowed not to rest until “each one of flood affected is not only reached but rehabilitated, no matter how much effort is required”, the military said in a statement.

According to Inter-Services Public Relations (ISPR), General Bajwa visited flood-affected areas of Balochistan today. The COAS went to flood relief and medical camps established at Goth Sadoori, Lakhra, and Lasbela and inquired about wellbeing of local people affected by the flash floods.

He also met troops busy in relief operations and lauded their efforts in service of men, women and children in distress

“The safety and well-being of our countrymen come first and we won’t rest until each one of flood affected is not only reached but rehabilitated, no matter how much effort is required,” military’s media with, the ISPR, quoted him as saying.

“The people of Pakistan are our priority and we won’t spare any effort to assist them in this difficult time.”

The COAS directed to utilise all available resources to assist the civil administration for the rescue, relief and rehabilitation of people and infrastructure in flood-affected areas.

“We must reach out to our brothers and sisters in need without waiting for orders and help them overcome this natural calamity,” the army chief stressed.

Historic monsoon rains and flooding have affected more than 30 million people over the last few weeks across the country. The destruction of infrastructure and breakdown in communication links adds to the difficulties faced by the authorities in rescue and relief efforts in the region.

The government has called on the international community to help as it struggles to cope with the aftermath of torrential rains that have triggered massive floods, killing nearly 1,000 people.

The Pakistan Army has also accelerated its relief efforts for flood victims during the past 24 hours, ISPR reported earlier in the day.

Commander Peshawar Corps Lieutenant General Hassan Azhar Hayat visited the flood-affected areas in Nowshera and directed to undertake all measures in rescue, relief and rehabilitation efforts on an emergency basis in coordination with the civil administration.

He also directed that all resources be utilised to help the affected population and restore critical communication infrastructure.

PTI funding case, FIA sent letters to over six countries including US, UAE