PKR hits historic low of Rs221 against dollar in interbank 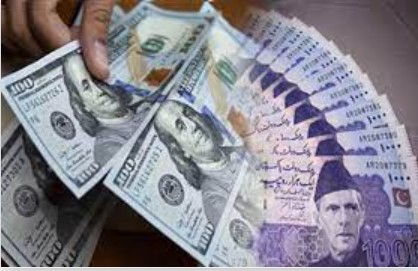 The rupee fell to an all-time low against the dollar for the second day in a row on Tuesday, reaching Rs221 in the interbank market.

According to the Forex Association of Pakistan (FAP), the greenback was up Rs5.8 against the previous day’s close of Rs215.20 to reach Rs221 around 12:00pm.

Mettis Global Director Saad Bin Naseer said the rupee was seeing a decline due to “panic buying [of the dollar] by banks in the interbank market”.

He said that “panic is setting in the financial markets following fears of change in [the] government in Punjab and Centre” after the by-polls on the province’s 20 seats.

The by-elections saw the PTI register thumping against the PML-N, which leads the ruling coalition. The win has raised questions about the coalition government’s future since incumbent Punjab Chief Minister Hamza Shehbaz will likely be unable to show the simple majority required to remain in the province’s top office in the re-election on July 22.

Naseer went on to say that the downgrading of Pakistan’s outlook from stable to negative by the Fitch rating agency further increased panic in the market.

Moreover, he said, the demand for dollar among importers had also “spiked” as the future of inflows from the International Monetary Fund (IMF), friendly countries and bilateral sources remained a concern.

“The dollar is getting stronger in the global market against almost all the world currencies. The Pakistani rupee is not an exception,” he said.

“In addition, Pakistan’s external account issues are not settled as yet. IMF is yet to be on-boarded and the flows are yet to materialise. Global rating agencies have put a negative outlook on the economy, so that is an additional burden that is weighing on the financial markets in general and foreign exchange market in particular.”

Schehzad called on all stakeholders to come together and devise a strategy to arrest the rupee’s fall.

FAP Chairperson Malik Bostan was more reproachful of banks when asked about the rupee’s freefall.

He alleged that banks were using the political situation in the country as an “excuse” and were involved in “satta bazi” (speculation) in the currency market.

“The State Bank should take notice of this and immediately impose restrictions on forward booking of dollars to put an end to the unnecessary rise in the value of the greenback in the market, as well as banks’ monopoly,” he said.

This, he added, would bring the “panic” in the market to an end.

Komal Mansoor, head of research at web-based terminal for financial markets Tresmark, said: “The floor for the rupee has vanished. This is senseless.”

She said that the central bank should intervene to stabilise abnormal movements, “otherwise [it] risks contagion in all other aspects of the economy”.

However, the strength gained by the rupee after $2.3 billion Chinese inflows evaporated within a couple of weeks, as the dollar snapped the rupee’s rising streak and gained Rs2.38 in the interbank market on July 5, the first appreciation in the new fiscal year.

Since then, the greenback has continued to rise with a slight reversal of the trend on July 15 — the day the IMF announced it had reached a staff-level agreement with the government. However, the rupee reversed its gains the very next day with analysts attributing it to low inflows and import payments.

On Monday, the dollar had reported a record single-day appreciation in the interbank market to reach Rs215.20 from Rs210.95.

In the first session, the greenback shot up to Rs217 but gradually came down to the level reported by the SBP. However, exchange companies reported that it closed at Rs216.20.