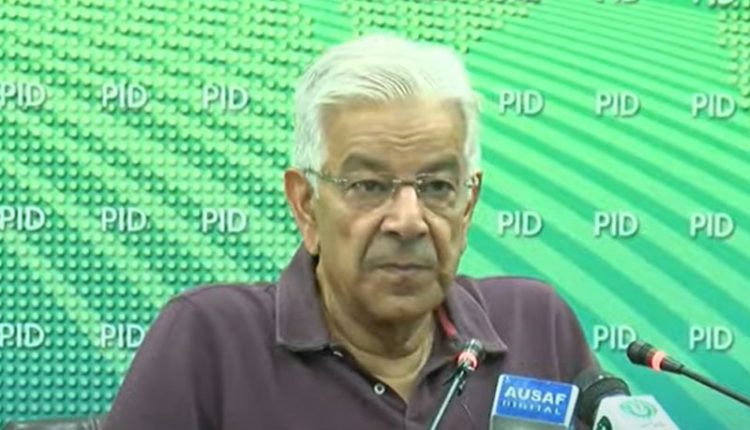 Islamabad: Defense Prime Minister Will Appoint New Army Chief Khwaja Asif has said that Prime Minister Shehbaz Sharif will appoint a new army chief in November as per the constitution.

While holding a news conference in the federal capital, Khawaja Asif said that what Imran Khan says does not matter, the appointment of the Army Chief is a constitutional duty which the Prime Minister will perform in November. Nawaz Sharif has also performed this constitutional duty 4 times. Nawaz Sharif has never made the appointment of Army Chief a subject of discussion.

Khawaja Asif said that there will be politics in the time of politics, when the elections will be held and the arena will be decorated, there will also be politics, but we are still ready for the contract economy. He said that politics can be kept aside. Criticizing former Prime Minister Imran Khan, the Defense Minister said that the addiction to power is breaking and he is saying such things in this situation. Which should not be done.
He said that Imran Khan wants to make the issue of appointment of army chief controversial. Imran Khan is trying to prevent Pakistan from getting aid for the flood victims. Imran Khan is harming Pakistan for power. In 4 years of government, Imran Khan left inflation and corruption.

Defense Minister said that Pakistan’s national security is linked to our economic security. Imran Khan repeatedly attacked the national and economic security of Pakistan. Due to the loss of power, their mental balance has been damaged. To a question, the Defense Minister said that the decisions of the courts are important sources of law, the decisions of the past should be kept in front. If the past decisions are not in accordance with the law and the constitution, it should be corrected.

In The News Conference

The Defense Minister further said that the Prime Minister had meetings with various heads of state during his visit to Uzbekistan, the most important meeting was with the Chinese President. Useful meetings were also held with the leaders of Russia and Turkey. All the heads of state have assured the prime minister of all possible support in the flood disaster. The Prime Minister will also visit China in the first week of November.

Khawaja Asif said that when he came to power, the situation was very bad. Soon the situation will improve, which will also reduce inflation. Today, the nation needs unity and political stability more than ever. Russia has offered to supply wheat and gas to Pakistan. He said that the Russian President has also invited Prime Minister Shahbaz Sharif for a visit, the date of which is being finalized.

Not Afraid Of The Enemy