Ishaq expected to return back with Prime Minister on Monday 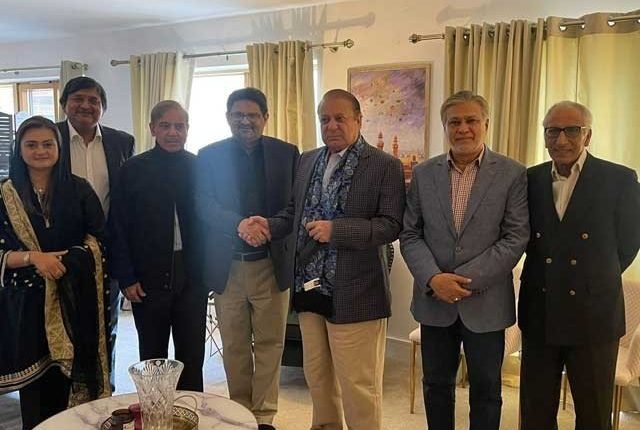 London: Federal Finance Minister Miftah Ismail submitted his resignation to Prime Minister Shehbaz Sharif and PML-N leader Nawaz Sharif. The PML-N Supremo has nominated Ishaq Dar as the new Finance Minister, after which he is expected to return to Pakistan along with the Premier.

According to the sources, an important party meeting was held in London under the chairmanship of Pakistan Muslim League (N) leader Muhammad Nawaz Sharif, in which the overall political and national situation of the country was discussed in details.

During the meeting, Miftah Ismail submitted his resignation to Nawaz Sharif and said that ‘the ministry was your trust, you made him the minister, he worked to the best of his ability in four months, he was loyal to the party and the country.

Nawaz Sharif paid tribute to Miftah Ismail for his resignation and said, “You performed your responsibilities under the most difficult circumstances, which is commendable.”

Sources told that it was decided in the meeting that the current government has to put out the fire of economic disaster caused by the previous government, and more steps will be taken for the betterment of the country.

While talking to the media after the meeting, Ishaq Dar said that important decisions were taken in the meeting chaired by Prime Minister and Nawaz Sharif, Miftah Ismail was also present in the meeting, he resigned from his post. Ishaq told that he is leaving for Pakistan on Monday along with the Prime Minister. He said that on Tuesday I will take oath as a member of the Senate, while on Wednesday I will take the oath of the post of Finance Minister.

According to the sources, the term of Miftah Ismail’s ministry was ending on October 18. According to the decision of the court and the committee of the parliament, he could remain as a minister for six months as an unelected member. An advisor or a special assistant could not be in charge of any ministry.

The government had the option of appointing Ishaq Dar as the finance minister immediately after Miftah Ismail as he is an elected senator and would take oath as a member of the senate on his return and then take over the portfolio of the finance ministry.