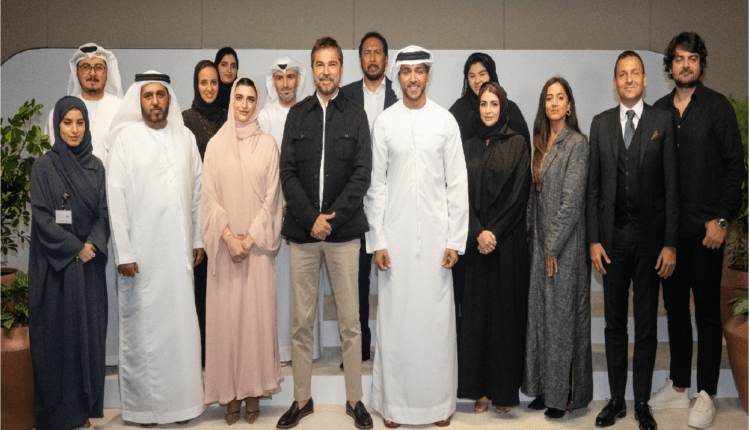 Staff Report
Dubai: Globally-acclaimed Turkish actor Engin Altan Düzyatan said that the diversity of talent, a robust infrastructure, and the variety of its scenic natural landscapes make Dubai a perfect choice for becoming a global hub for the production of films and TV series.
The actor, best known for his starring role in the hit Turkish drama ‘Dirilis: Ertugrul’ (‘Resurrection: Ertugrul’), was speaking at a meeting held with the Dubai Media Council.
The meeting, hosted at the Dubai Press Club, was part of a series of engagements that Dubai Media Council has been organising to foster dialogue between the Dubai community and global influencers and thought leaders in the media, entertainment, and creative and cultural industries.
The meeting served as an opportunity for the Dubai Media Council to explore new avenues of collaboration with leading Turkish production companies to further enhance the sector’s role in Dubai.
In discussion with a group of local industry professionals, including producers, filmmakers and students, who also attended the meeting, the award-winning actor highlighted the influential role of TV series and films in showcasing the culture of a nation and promoting tourism.
During the meeting, Düzyatan shared his experience as a lead actor in the highly successful series ‘Dirilis: Ertugrul’, which gained massive popularity worldwide.
The Netflix series, dubbed into six languages and broadcast in more than 70 countries, has been watched by billions of people worldwide.
Düzyatan spoke about the huge appetite for historical TV series and the massive efforts and costs that go into producing such works.
The renowned actor underlined Dubai’s ability to continue drawing in filmmakers from around the world to shoot in various locations in the city. “The city has some amazing landscapes and picturesque natural areas that can serve as great locations to shoot films,” he said. “Dubai is also a very cosmopolitan city with many diverse nationalities living here, making it a unique place for producing TV shows that showcase this diversity.”
The celebrity Turkish actor also highlighted his keen interest in collaborating with Dubai-based production companies and working with various city talents.
Welcoming the actor, Nehal Badri, Secretary General of the Dubai Media Council, said: “It was our pleasure to host renowned actor Engin Altan Düzyatan, who has become popular worldwide for his leading role in the historical saga Dirilis: Ertugrul.
“Turkish serials like Dirilis: Ertugrul have been able to reach international audiences and touch the hearts and minds of people across the world, creating positive soft power and goodwill for the nation.
“The meeting served as an opportunity for dialogue, building bridges between Dubai and Turkey, and exchanging knowledge and ideas in meaningful ways. The Dubai Media Council is keen to work with media industries across the world to widen the creative talent base in Dubai and enhance the skills of professionals in our media and creative ecosystems.”
Issam Kazim, CEO of Dubai Corporation for Tourism and Commerce Marketing, said: “The world-famous Dirilis: Ertugrul series is a perfect example of how soft power was used to raise Turkey’s profile on the global tourism map and attract people from around the world to visit, live and work in Turkey. The series was able to spotlight some of the country’s famous landmarks, some of which have become iconic and Instagrammable landmarks.”

Kazim added that Dubai continues to strengthen its position as a global filmmaking destination and a regional film production industry hub, with many international production houses choosing Dubai as a filming location. He noted that Dubai has been featured as the backdrop of several big-budget international blockbusters, including Mission Impossible: Ghost Protocol (2011).
During the meeting, Sarah Al Jarman, Director of General Channels at Dubai Media Incorporated (DMI), spoke about DMI’s plans to strengthen cooperation with leading media companies, global production houses as well as creatives from across the region and the world in order to enhance the content it provides on its channels.
Al Jarman also said that the group is keen to achieve the objectives outlined by the Dubai Media Council to enhance the media sector’s development in Dubai.
The meeting was also attended by Saeed Al Janahi, Executive Director of Operations at the Dubai Film and TV Production Committee; Salem Belyouha, Director of Media Services at the Government of Dubai Media Office; Emirati film curator, producer and co-founder of Cinema Akil, Butheina Kazim; Ender Sevim, Founding Partner of Depo Film; and Barbaros Citmaci, Managing Partner of 2B Productions.