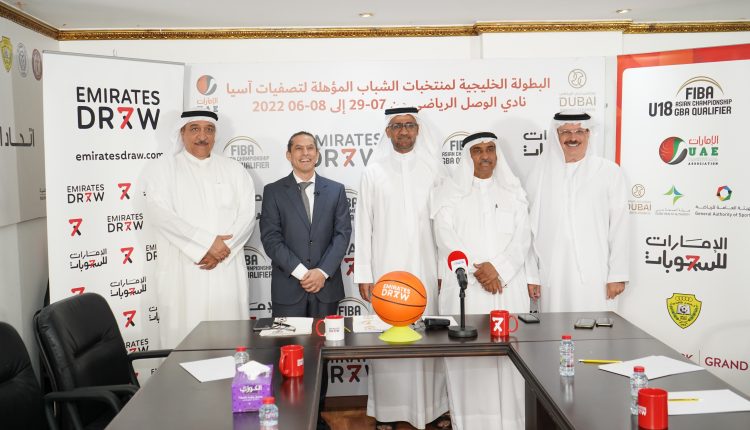 Dubai, UAE July 25, 2022: Following the UAE’s aspirations for sporting excellence on the world stage, Emirates Draw is delighted to announce that it is the Main Sponsor of the FIBA U18 Asian Championship GBA Qualifier, which will take place from 29 July to 6 August 2022. This association is in line with the directives of the country’s wise leadership to promote a culture of participation in various community initiatives. In addition to the organisation’s expanding efforts to build on its vision, as the beacon of hope with the power to transform lives and create a sustainable economy for a better tomorrow.

Emirates Draw’s sponsorship was revealed during the tournament’s official press conference yesterday at the UAE Basketball Association Headquarter. The event was attended by senior representatives from FIBA Asia, the UAE Basketball Association, Dubai Sports Council, the General Authority of Sports and Emirates Draw in the presence of local, regional, and international media.

“Our participation in this key sporting tournament, considered to be among the strongest championships in the Middle East, is derived from our firm belief in giving back to individuals and the society as a whole. Following the UAE’s aspirations for a Better Tomorrow, we take genuine pride in our support of our nation’s youth team as they represent our country in the FIBA Asian Cup. Basketball is truly an exciting sport with a growing following across the UAE and beyond and as such we hope to touch as many lives as possible through this collaboration,” pointed out Paul Chader, Head of Marketing at Emirates Draw.

The organisation’s determination to support communities in the UAE and beyond continues to be reflected in its weekly draws, which has changed the lives of more than 23,000 winners by distributing over AED 31M in just over ten months of operation.

Emirates Draw is also an active participant and supporter of the UAE’s sustainability agenda through its ‘Coral Reef Restoration Programme’. The Programme is led by experienced divers and volunteers who are passionate about preserving the UAE’s rich marine life. So far, multiple locations have been surveyed and over 4,000 coral polyps planted at different sites across the country, and plan to intensify planting efforts is in line with the government’s conservation mandate to further support the UAE’s leading role in the efforts currently underway to preserve coral reefs across the region.

The AED 100M Grand Prize, the largest in the region, remains up for grabs to be claimed by a single person or group of people who match all seven numbers from right to left, at which point the grand prize resets to AED 77 million. Optimistic participants have another chance to try for the life-changing prize during the next draw round, which will be broadcast live on Sunday, 31 July 2022, at 9pm UAE time.

Entrants can choose to participate in the weekly draw by purchasing an AED 50 pencil, part of which goes to support the environment through the planting of coral polyps along the coast of the UAE and as part of Emirates Draw’s main corporate social responsibility programme to support the UAE government’s vision. After registering online at www.emiratesdraw.com or through the mobile application, participants can select their seven-digit number or have the system choose their number randomly.

With their purchase, participants are entered into two separate drawings, the first a raffle draw where every week seven lucky participants are guaranteed AED 77,777 each. In addition, all participants have the choice to be entered into a second draw with 7 prize categories that start at AED 7 and include the Grand Prize of AED100 million when all seven numbers are matched.

The next draw will be live streamed across its digital platforms, YouTube, and Facebook.  Be the next lucky winner and book your numbers early!

A socially responsible UAE based organization that aims to support local environmental causes and initiatives through the CSR programmes that it spearheads. The organization aspires to provide ‘For a Better Tomorrow’ and radically improve everyday life for its lucky winners and society at large. Inclusive to all, eligible participants (18 years and above) are entered into two weekly draws; the first draw featuring seven guaranteed winners of AED 77,777 each and the second draw for seven prize categories including the largest Grand Prize in UAE history and the region of AED 100 million.