CEO of JBS Group honoured with doctorate of excellence 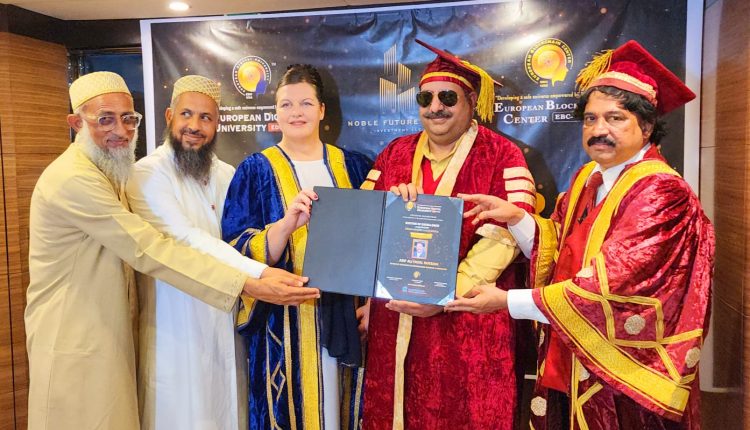 Dubai-based entrepreneur Dr Shanid Muhammed, founder and CEO of JBS Groups of Companies was honoured with doctorate of excellence for his contributions in leadership and international business.

DUBAI: The UAE’s emirate of Dubai, is known as the business hub among all developed countries. The United Arab Emirates is the union of seven states that came into existence in 1971. The leadership of UAE has made it a unique and high-ranked country in the world. Its people also joined hands with the leadership to equip the country with modern and advanced technology.
The UAE has now become the centre of global trade with a number of industrial zones to cater the needs of Central Asia. Its ports are serving as the cargo hub for all Asian countries as all mother vessels call on the main Jabal Ali port and feeder vessels depart for all other surrounding countries such as Pakistan, India, Saudi Arabia, China, etc.
The UAE, especially Dubai, has no match in the field of travel and tourism as the leadership has made the country so attractive for the people of the entire world to visit it again and again.
To cope with the requirements of the modern era, digital (crypto) currency like Bitcoin has been highlighted in the United Arab Emirates. In this regard, Suzanne Ann Minor, a representative of the famous European Digital University, and Professor Sidhic Mohammed organised an event with the cooperation of one of Dubai’s leading business groups, NFL Investment LLC, at Dubai Marina Yacht Club. The purpose of the event was to highlight Niagara Blockchain City in Canada — also being dubbed as ‘The City of Fortunes’ of the future.
A large number of doctors, engineers, businessmen and students attended the event.
In Niagara Blockchain City, on 500 acres of land, is to be launched from Dubai in partnership with NFL Investment LLC under the program of European Digital University.
For the development of Niagara Blockchain City in collaboration with European Digital University Blockchain Concept, the authorities plan to include the chapter in the syllabus of schools, colleges and universities for the awareness of students and upcoming generations so that they may understand the concept.