Hundreds Of Volunteers Across UAE 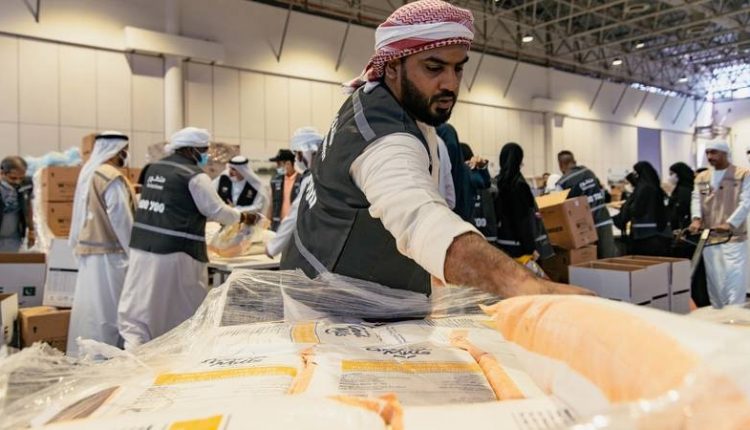 Hundreds Of Volunteers Across UAE joined hands on Saturday to pack thousands of urgent relief kits and food supplies for people affected by the devastating floods in Pakistan.

Emiratis, residents, children and people of determination came together at Abu Dhabi National Exhibition Centre, Dubai Expo City and Expo Centre in Sharjah between 9am and 1pm, in a nationwide volunteering initiative to collect thousands of boxes to be sent to those in need.

By the end of the day 1.2 tonnes of supplies were packed into 30,000 boxes by volunteers.

The community event, called ‘We Stand Together’, also gave children an opportunity to write uplifting messages and create drawings, which were placed inside the relief boxes to show solidarity with the people of Pakistan and offer a sense of hope amid the crisis.

On Saturday, United Nations chief António Guterres called for “massive financial support” from across the globe as he visited the flood-hit nation.

Floods caused by monsoon rains have killed about 1,200 people, including more than 400 children, and affected 33 million others since June.

The food supplies included flour, rice, lentils, tomato paste and oil, while relief kits consisted of essential toiletries for women and children, such as diapers, sanitary pads and soaps.

About 500 volunteers gathered at Expo Centre in Sharjah to pack the boxes on Saturday before shipping the relief kits directly to Pakistan.

“The campaign is from the UAE nation to the Pakistani people,” Mohammed Al Suwaidi, deputy director of Sharjah Charity International, told The National on Saturday.

“There will be about 10,000 relief boxes in each location. Many volunteers from the UAE participated in the campaign.”

The initiative was led by Emirates Red Crescent Authority, Dubai Cares, and Sharjah Charity Association, in co-ordination with the Ministry of Foreign Affairs and International Co-operation and the Ministry of Community Development.

Young and old doing their part

He was one of the youngest volunteers who came with their families.

Sealing the boxes at Sharjah Expo Centre. Photo: Issa Alkindy for The National

“First I wrote some words in Urdu on cards to show solidarity with the affected people. I put the cards in the boxes and am now helping my mother to pack the boxes. It will help my country.

Three Emirati children, aged 10, 12 and 13 came with their father to help him pack food supplies.

“Stay safe, happy and healthy always,” wrote Hamdan, Mohammed and Khalfan on the cards placed in the boxes.

“They came today to help prepare the relief kits and send them to Pakistan. It is important to teach them about helping others from the early stages of life.”

Some volunteers arrived early to help finish the job quickly and get the relief kits on their way.

Hundreds Of Volunteers Across UAE

“I’ve been a volunteer in UAE for the last three years. I’m happy to know I can help affected people in Pakistan. It is part of the solidarity of UAE people. I wish for them to be safe and we are supporting them,” Ms Iskandar said.

Last month, the Pakistan government and the UN launched a formal appeal for donations in response to the floods. The UAE is operating an air bridge to transport humanitarian aid.

Hundreds Gather Across UAE To Pack Donations For Pakistan