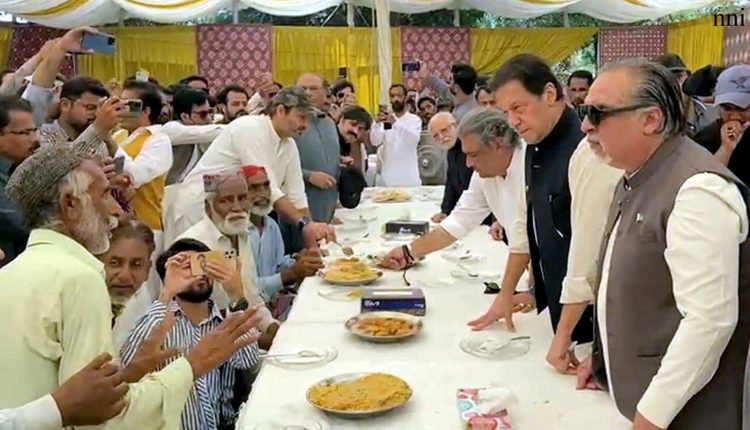 Hyderabad: Pakistan Tehreek-e-Insaf (PTI) Chairman Imran Khan announced on Monday that his party would provide Rs1 billion from its fundraising efforts for relief and rehabilitation of Imran Announces Rs1b Funds For Sindh Flood Relief the flood-affected people of Sindh.

Speaking in Sukkur during a visit to the district, Imran stated that if he was re-elected as the prime minister he would construct big and small dams along the Khirthar mountain range to prevent flooding in the future.

“We will build dams … so that we can turn this water into blessing,” the PTI chief said, referring to the water gushing from hill and into the streams, which caused floods in the districts on the right bank of the Indus river.

While announcing Rs 1 billion funds for the province, Imran said that the PTI Sindh chapter would decide if those “funds will be spent on a particular area or divided among the affected districts”. “More funds will be generated for Sindh in the upcoming telethone,” he added.

Imran stressed that he was visiting Sukkur to personally observe the rain and flood devastation, adding that he had also been briefed about the disaster by party leaders. “Before coming to Sukkur, I saw a map, which showed that Sindh is the most-affected province.”

He noted that drainage system in Sindh was in shambles and encroached, therefore, water stagnated in the urban and rural towns as well as agricultural fields. “The water drains are blocked. Whenever we stop the natural route of water, it causes destruction,” he said.

Imran stressed the need for harnessing the floodwater and prevent its wastage. He recalled that his government was the first in the last five decades which initiated the construction of 20 dams, including three big dams.

The PTI chief mocked Pakistan Peoples Party (PPP) chairman and Foreign Minister Bilawal Bhutto Zardari, saying that “when it rains, water comes but when the drains are made water doesn’t harm”.

The former prime minister also attacked former president and PPP Co-Chairman Asif Ali Zardari. He asked Sindh’s youth to get ready for a political movement to defeat “Zardari and his mafia”, adding: “I promise today that we will defeat dacoit Zardari and his system of cruel governance.”

Khan repeated his allegation that Zardarhi had been stealing Sindh’s wealth and stashing it abroad. “The biggest reason for poverty in Sindh is Asif Zardari and his mafia,” he alleged. “Now, the time has come to put an end to the PPP’s rule in the province.”

Imran said that he would prepare the Sindhi people to rise the ruling elite. He vowed that the people of Sindh would become his team and that he would be their captain. He alleged that the PPP was plundering Sindh, while playing ‘Sindh card’.

Imran also underlined that the threat posed by the climate change could not be ignored. He stressed that the tree-plantation drive had to be launched in Sindh.

During the visit, the PTI chief met the flood-affected people over a lunch. He also interacted with the people by visiting their tables and listened to their complaints. The people told Imran that they were not getting food, water and other relief items.

They flood-affected people asked the former prime minister to visit Kambar-Shahdadkot and other districts of Sindh as well.