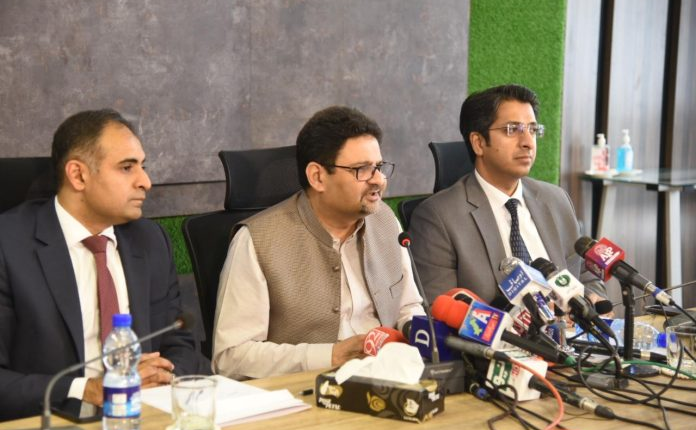 During a presser in Islamabad, Miftah stated that the PTI did not care about the state and recommended that they leave the political field if “harming the country was politics”. He maintained that the incumbent government had put politics at stake in an effort to save the country.

Miftah discussed the audio leak and the letter the provincial minister had written to him last week wherein he conveyed that K-P could not deliver surplus this year – a condition for the IMF programme.

Miftah claimed that Jhagra had sent the letter to the IMF before sending it to him.

“I checked with the IMF within an hour of receiving the letter and they already had it,” Miftah stated.

Miftah furthered that Imran Khan should ask the country for forgiveness, Jhagra should resign and Tarin should quit politics.

“Is this why you partake in politics?” he questioned.

Miftah maintained that only Punjab’s finance minister, Mohsin Leghari, had questioned if the country’s reputation would be marred by the letter.

“Nobody else questioned the move. Jhagra said he knew the IMF’s number 2 and would give him the information”.

According to Miftah, PTI’s play was the “most shameful thing”, and “the real faces” of the party leaders had been exposed.

He also urged PTI supporters to question Imran about the letter Jhagra wrote and if it was in the state’s interest.

Referring to the current floods devastating the country, Miftah said Pakistan was “drowning and the one support after God is the IMF programme”. He highlighted, however, that amid the ruin, the PTI had resorted to a “below-the-belt act”

“Should Imran change Pakistan’s name to Bani Gala? Should we hang Pakistan on Imran Khan’s orders? Has he become bigger than Pakistan? Are the PTI not ashamed?,” the federal minister lamented.

Commenting on Jhagra’s letter, Miftah said that the provincial minister had written that the federal government did not give money to K-P for temporarily dislocated people. However, the letter was sent three days before the IMF board was to meet, he said, adding that the PTI wanted him to make sure he was helpless.

He further claimed that the provincial government had not justified what the money was needed for and that they had created 19,000 additional posts after the merger of the Federally Administered Tribal Areas.

Read more K-P throws a spanner in the works

“If there is a problem, we are happy to talk. Murad Ali Shah writes a letter to me daily. What is new in this? This is a normal give-and-take. You write a letter 72 hours before [the IMF meeting] and send it to IMF’s number 2.”

“You are telling us there are floods. Do we not know that we will need more money? Will it not be mentioned in IMF’s conditionalities? But at least let [the programme] be approved.”

Questioning if the PTI leaders’ actions came at the right time, Miftah maintained that it was proven that they wrote the letter two days before to ruin the IMF deal.

According to the finance minister, Pakistan was on the verge of bankruptcy when the incumbent coalition government came into power and many political leaders – including former premier Nawaz Sharif – had advised the PML-N against forming a government due to the turbulent economic condition of the country.

“The PTI took Pakistan to the verge of bankruptcy, confirming a programme with the IMF and then revoking it, and leaving a deficit of Rs350 billion with Rs600 billion adjustors after telling the IMF the deficit would be contained to Rs25 billion”.

He claimed that the PML-N had risked its “political capital” to save the country from defaulting after coming into power and highlighted the difficulties they faced in resuming talks with the international money lenders to continue its programme.

“When we raised petrol prices, Tarin and Asad Umar criticised me as did the people of my party,” Miftah said, questioning what choice he had in the matter.

“Would we bankrupt the country to save our ministries? We would not have done that even in the opposition,” he remarked, reiterating that after becoming premier, Shehbaz Sharif had invited the PTI to discuss a charter of economy, but the latter refused.