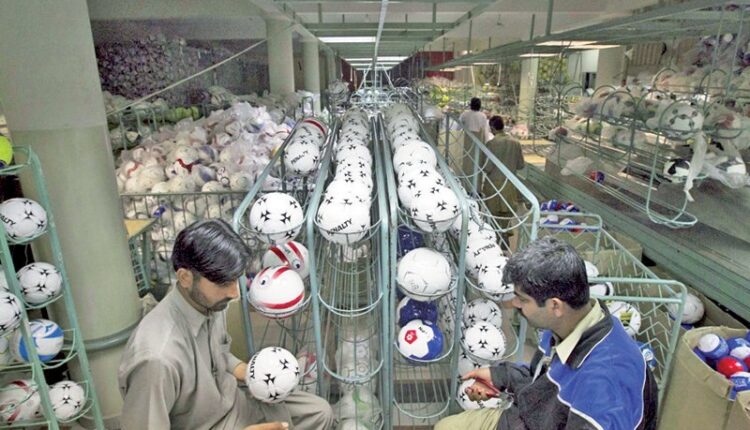 Together with China, Pakistan is supplying the soccer balls to be used in the forthcoming mega event, which this time will be held in the winter instead of the summer due to the hot weather in the Qatari capital.

“We have once again been chosen to supply soccer balls for the World Cup, which is an honour for us and a testimony of the quality we have maintained,” said Khawaja Masood Akhtar, the chairman of Forward Sports, a contracting manufacturer of global sports brand Adidas.

Nestled on the outskirts of Punjab’s Sialkot, workers at the company’s sprawling facility are working extra hours to ensure on-time delivery of the footballs.

The city, which borders India, has been famous for producing the finest quality sports goods and has been supplying footballs for mega-events for a long time.

Production of high-quality footballs is not Sialkot’s only forte. It also exports sports goods ranging from cricket bats to hockey sticks and from shining (cricket and hockey) balls to other accessories like kits, shoes, and gloves.

The country earns $1 billion annually from sports goods exports, including $350 million to $500 million from footballs alone.

Declining to give the exact number of footballs the company will supply for the World Cup due to restrictions from Adidas, Akhtar said it would be “not in thousands but millions”.

Named “Al-Rihla,” Arabic for “The Journey,” the official match ball for the 2022 World Cup was unveiled in March by Adidas in Doha.

Forward Sports, which also makes footballs for the German Bundesliga, the French league, and the Champions League, was also the official football provider of the 2014 and 2018 World Cups in Brazil and Russia.

The soccer ball to be used in the forthcoming tournament is technically termed “Thermo bonded,” which was first introduced in the 2014 World Cup.

Before that, Pakistan had supplied hand-stitched soccer balls for most of the World Cups from the 1990s to 2010.

Other types of soccer balls produced in Sialkot are “glued” and “hand-stitched.”

Thermo bonded balls are made by attaching the panels through heat — the latest technology adopted by Adidas and transferred to forwarding Sports in 2013. There are no stitches.

“We have made some changes in (the design of) footballs this time, keeping Qatar’s culture, environment, architecture, and flag in mind,” Akhtar said.

“And it will be environment-friendly,” he said, adding that for the first time, only water-based inks and glues have been used to make the footballs.

Soaring inflation and energy tariffs combined with rising labour costs have not turned out to be a problem for Akhtar.

“Everything is running smoothly, as we chalked out our plans, keeping all these factors in mind. In fact, we have hired some additional labour to ensure on-time deliveries,” he said.

Football is a popular sport in otherwise cricket-obsessed Pakistan, particularly in rural areas. Yet the national team is ranked 200th in the FIFA World Rankings.

Lacking glamour and government funding while having to deal with intra-federation schisms and land-grabbing petty mafia who have been sweeping up sports grounds, football in Pakistan has gradually declined from its rank as fourth on the Asian continent in the 1960s.

Straddling the edge of the Arabian Sea, Lyari, a small shantytown of Karachi, is known as “mini Brazil” among soccer fans for the talented football players that this run-down locality has produced over the decades.

The area has over the last 74 years produced a large number of players who have won many titles for the country, especially between the 1950s and 1960s, known as the golden era of Pakistan’s national football team.

The action was taken when the group refused to vacate the office and hand it over to a FIFA-approved group.

The membership, nonetheless, was restored by FIFA after a period of over a year on Thursday.

ECP’s Show Cause Against Imran And Fawad Suspended