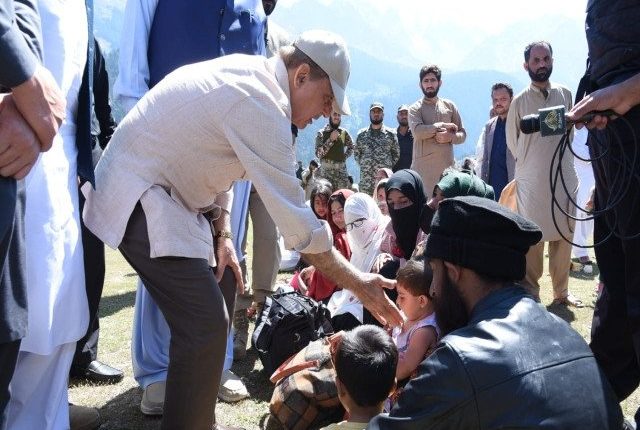 Kanju: Prime Minister Shehbaz Sharif on Wednesday announced a Rs10 billion grant for Khyber-Pakhtunkhwa (K-P) as he visited the flood-hit areas of Kanju in District Swat to review the rescue efforts underway.

While speaking to the media during his visit, the premier said that K-P and Balochistan will get a grant of Rs10 billion each while the federal government will provide Rs15 billion to Sindh for rehabilitation and relief efforts after floods wreaked havoc across Pakistan.

Moreover, he said that the government is also giving Rs25,000 to each family affected by the catastrophe, while those families who have lost loved ones will be getting Rs1 million each

He went on to thank the international community for stepping up to help Pakistan in its time of need and for providing the resources necessary to provide relief to the flood victims.

“Presidents of Turkey, UAE and Iran have vowed to help Pakistan in whatever way possible,” he informed.

“Flights containing relief goods from the UAE and Turkey have arrived,” he said, adding that these goods are being distributed by the PDMA and NDMA.

He also thanked the United Nations for launching a ‘Flash Appeal’ of $160million for Pakistan, assuring that he will personally ensure that the money is put to good use.

During his visit to Kalam, the premier directed relevant authorities to evacuate tourists immediately.

He was briefed that six helicopters of the Pakistan Army were currently being used to save tourists and bring them to safer destinations, while as many as 700 tourists were still left and are expected to be rescued by tomorrow.