Rs. 25000 for each flood-hit family accros the Pakistan: Shahbaz Sharif

The cash disbursement will be done through Benazir Income Support Programme, says Premier 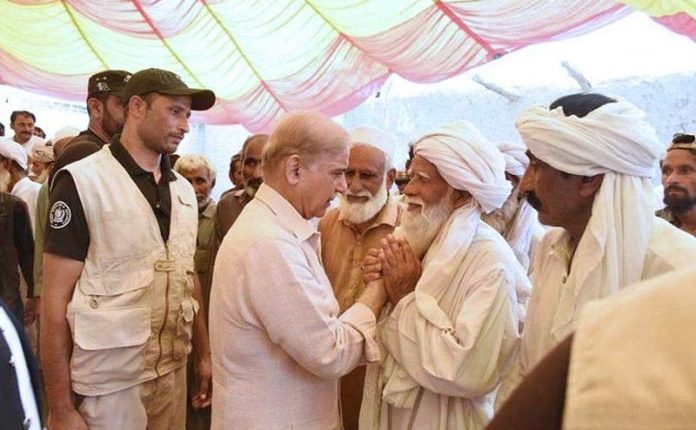 Islamabad: The Prime Minister of Pakistan Shehbaz Sharif has launched Rs37.2 billion Flood Relief Cash Programme to provide Rs25,000 cash assistance each among 1.5 million families across the flood-hit areas of the country.

The premier, addressing the launching ceremony on Friday, said the cash disbursement will be done through Benazir Income Support Programme in collaboration with the National Disaster Management Authority (NDMA) and other allied departments.

He said that the heavy monsoon rains and consequent floods affected all four provinces with Balochistan being the most affected where hundreds of people died and infrastructure was destroyed.

He also paid tribute to the six martyred army officers including Quetta Corps Commander Lt General Sarfaraz who sacrificed their lives in a chopper crash during the flood relief operation.

Mentioning his multiple visits to the flood-hit areas, the prime minister appreciated the rescue and relief efforts of all including the NDMA, the PDMAs, the National Highway Authority and other provincial departments.

“The whole nation needs to unite to face this situation. The federal and provincial governments are also cooperating with one another. Our international partners and donors are also extending their support,” he added.

PM Shehbaz told the gathering that the cash assistance programme, launched in Jhal Magsi area of Balochistan, would support over 9 million people across the country.

As assured by the NDMA chairman, the prime minister said the cash disbursement would be completed within three days to help the people afford their food and other immediate needs.

He said that in the next phase, a joint survey would be carried out to assess the damages to crops, houses, highways and bridges which would follow the coordination with provinces to carry out the rehabilitation work.

The premier also thanked Finance Minister Miftah Ismail for scraping Rs37 billion from the national kitty to support the flood-hit people in the distressing time.

The programme has initially been launched in four districts of Balochistan – Jhal Magsi, Khuzdar, Qilla Abdulla and Lasbella. Through a video link, the beneficiaries in Jhal Magsi area were also shown receiving cash assistance.

Planning Minister Ahsan Iqbal, who also heads the Flood Relief Committee, told the gathering that being one of the five countries facing the worst impact of climate change, said Pakistan needed not only to support its people but also to redesign its infrastructure to avert losses in future.

He said that in the first phase, the committee identified the areas worst hit by the floods to provide cash assistance. In the second phase, a joint survey would be done to assess damages to houses and crops for their rehabilitation.

In the third phase, the government would collaborate with international development partners to help redesign the infrastructure to prevent flood-caused damages in the future. he added.

Minister for Poverty Alleviation and Social Safety Shazia Marri, through video link, apprised the gathering of the death toll by the flood.

She said that the country got unprecedented heavy rains which were yet going on in some areas further deteriorating the flood situation.

She assured that the BISP would ensure cash disbursement in a transparent manner based on the data.

NDMA Chairman Lt General Akhtar Nawaz said the country got an overall 150% more rain in Pakistan and 318% in Balochistan.

He said the NDMA and other institutions like the Pakistan Army is actively engaged in rescue and relief operations, besides the United Nations and other development partners also extending cooperation.

He said the cash assistance would be disbursed across 724 union councils of four provinces which would follow the compensation for the flood-caused losses.