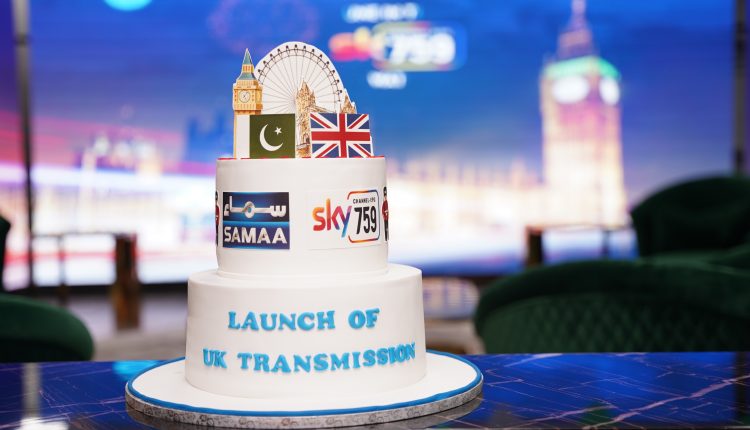 August 18, 2022 – UAE: Pakistan’s leading Urdu-language news and current affairs channel SAMAA TV has announced its return to the UK on SKY. Viewers will be able to watch SAMAA programs and news on SKY EPG 759 starting from Thursday, August 18, 2022.

This is a significant milestone for the channel which has become one of the most watched news channels in Pakistan since its launch in 2007. The channel’s extensive coverage of breaking news and current affairs has made it a trusted source of information for viewers across Pakistan. With the launch of its UK transmission, Samaa TV will now be able to reach a wider audience and provide them with timely and accurate news updates.

“Our success in the Middle East and Pakistan has been a catalyst for re-expanding SAMAA to serve the Pakistani diaspora in the UK. We aim to provide a sense of unity to our audiences outside the country as a channel that is sensitive to Pakistani culture and traditions. We are confident that our UK viewers will appreciate our unbiased and objective approach to news reporting. Samaa TV looks forward to bringing them informative and entertaining programming that keeps them updated on the latest developments from Pakistan and around the world “said Naveid Siddiqui – CEO of SAMAA Tv.

The news channel already has a wide global viewership of approximately 29 million households across Europe, North America, Asia Pacific, and the Middle East and is available on Mobile, IPTV, Satellite, and OTT Platforms. It has also been the source of authentic information for many international news agencies interested in reporting on the socio-political aspects of Pakistan. Not only has SAMAA outranked its competitors in conventional news viewership, but it also boasts some of the highest numbers on social media, with more than 7.36 million subscribers on its YouTube channel, 2.8 million followers on Twitter, 750,000 followers on Facebook, and more than a million visitors a month on its website:http://http://www.samaa.tv

SAMAA TV’s accuracy and timely reporting have earned the news channel outstanding credibility as a responsible media organization. In addition to already offering content in the edutainment and infotainment space, the broadcaster plans to officially enter the entertainment sphere with an entertainment channel set to be released locally and internationally in the near future.

“We are excited to announce the re-launch of SAMAA in the UK through our partnership with SKY as it provides us the opportunity to strengthen our reach amongst the Pakistani viewers in UK and signifies our ongoing commitment to deliver thought provoking and engaging content captivating the hearts and minds of Pakistanis all over the world. We are confident that our channel will prove to be a valuable addition to the UK’s media landscape, and we look forward to bringing our viewers an informative and entertaining experience.”said Mohammad Raziq, the Executive Director of International Operations. Based on the research of the channel’s audience, a new direction has been established by launching new programs like Black and White with Hassan Nisar and Mere- Sawaal by Mansoor Ali Khan which pushes the programming beyond news headlines and towards interaction, discussion, and deeper analysis. Researchers are working on new ways to cure diseases such as Alzheimer’s disease,…

GITEX North Star: A platform to boost the start-up ecosystem in Dubai