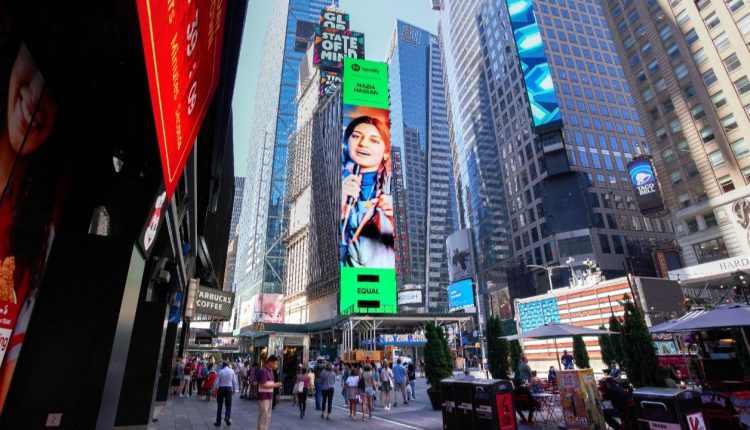 NEW YORK: Remembered as one of the most influential singers in the sub-continent and referred to as “The Queen of South Asian Pop” by her fans, Nazia Hassan lit up Spotify’s digital billboard at the iconic Times Square, New York City, as EQUAL Ambassador of the month.

Her ambassadorship and feature on the billboard were timed to coincide with her 22nddeath anniversary as a tribute paid to the pop icon.

Nazia is revered as a legend not just in Pakistan but across the globe for redefining the genre of pop music at a time when it was relatively unexplored. She is amongst a rare league of artists who have etched an irreplaceable mark on people’s hearts. Sharing his thoughts on this special occasion and remembering Nazia as a woman of substance, her brother Zoheb Hassan said, “My sister always considered herself as a social worker, and not really a musician. She worked with the UN for children and peace in the region, she also did a lot of charitable work as she wanted to help children and young people in need, and she did all of this very quietly.”

Before Hasan, the program has honoured Grammy winner Arooj Aftab, Natasha Baig, Hadiqa Kiani, and Mehak Ali and has a list of exemplary female voices to introduce the world with.