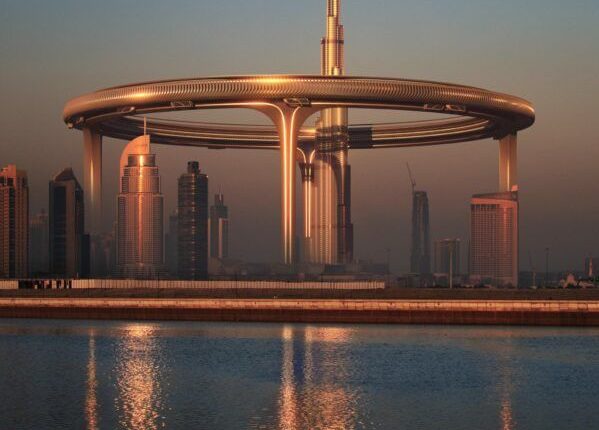 Co-founders of a Dubai-based architecture firm have created a radical design that would transform the city’s skyline.

The proposed design will encircle the entirety of the Downtown Dubai and Burj Khalifa neighbourhood in a 500-metre tall giant ring called the Downtown Circle. The structure will have a circumference of three kilometres.

The design for Downtown Circle was originally an entry in a design competition launched by the Dubai Future Foundation.

They were designed by Najmus Chowdhry and Nils Remess of the Znera Space; artists’ illustrations of the striking design gave the Downtown Area and Burj Khalifa a transformative appeal. The ring would be supported by five vertical beams or columns 500 meters high. The span of the circle itself would be composed of two main rings held together by a continuous green belt named the Skypark.

“Different natural scenarios and climates are recreated inside the continuous Skypark, forecasting a lively journey to the visitors and residents,” Znera Space on its Instagram page.

Architects at Znera Space are a group that designs structures that focuses on experimental designs which address socio-economic and environmental issues. The system will be broken down into smaller units containing public, private, and commercial spaces and will be self-sustainable and self-sufficient.

“Visitors can experience the canyons, sandy dunes and plants from various floras. Swamps, waterfalls and tropical vegetation or the digital caves, cascades, fruit trees and flowers of various hues and species together enrich the green ecosystem,” the post added.