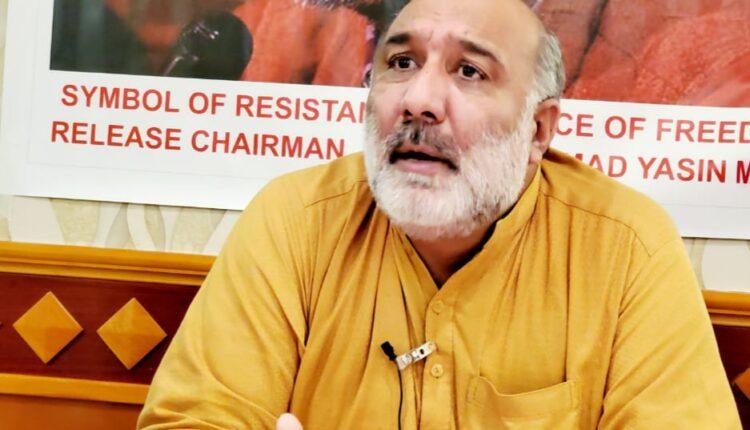 An open  letter by U.S based Anwar to the world community

Excellences, Leaderships, and masses of the present demure and honorable world.

We the 22 million people of erstwhile state of Jammu Kashmir are still seeking the global justice on the grounds of purely human stances and the UN charter expends the judications and ensures the equilibrium across the globe without any discrimination. However, still for 75 years we could not have an incentive to get rid of insurgence, the proxies, and a battlefield of arms race. Our political space and spectrum are outrageously marginalized and

Why and how this obscurity implicating our space:

Yasin Malik is the torch bearer of this plea, which is nonviolence, what exactly is that, yes, we have had scarcity of the political space and no plaques to avail the normal and usual political space to decide our fate, future and right of self-determination.

Insurgencies, proxies, ferocity have created a scarcity or indeed no political space for the people of Jammu and Kashmir.

Yasin Malik, a prisoner of conscience has initiated and played a role in the creation of the multilateral interactions to lead the cause towards respectable and non-violent solution inspired by the wishes of people of Jammu and Kashmir.

He is the initiator of valiances which are backed and believed by the non-violence approach for the resolution of JK conflict. So, by virtue of his plea and initiation, he must be given a political space and spectrum to operate and pamper. He has done all discourses which are leading towards this aspect.

He exercised all that soft skills and motives, across the , Indian and Pakistani media, think tanks political intellects, academic and associated forums. So, these are the motives which are to be respected, facilitated, promoted, pampered to have a violence free atmosphere which can yield ultimately a long durable and inspired solutions.

He has supported all CBMs initiated by government of Pakistan and India inform of composite dialogues, intra  bus service, trade and people to people contact. He urged to both of governments to open the  for intra  support during lethal 2005 Earth in Himalayan region. He requested to the youth of Kashmir to leave insurgencies, gun down and adopt the ways and methodology of non-violence democratic means to get rid of this conflict.

He emphasized that tri-lateral duologues are more prolific to address the conflict of Jammu Kashmir.

What we want nothing extraordinary but a normal human life with dignity as a nation as we before the commencement of the conflict popped up due to some geographical and demographical changes in the subcontinent.

Generations are lost, half widow villages exist, masses along  are always in heavy cross arms competitions.

He advocated vibrantly in all available forums for peaceful solutions, common initiatives, true representations, tri-lateral dialogues, smooth transitions, logical transformations, and benchmarking with his own activities.

What he has done wrong, as stipulated above?

Any court of law, think tank of the world, law and order agencies of world can vow that what is wrong in it.

He admired all the struggles and movements in subcontinent, which were proclaimed on nonviolence basis.

Any Law lords can observe, articulate independently his act of violations in view of the basic freedom which is ensured by UN Chatter across the globe without any devastation.

What is contemporary now?

Absolutely, against all the merits, trends, laws, charters, political freedom, political space provisioning, freedom of expression and of course the humanity on the top.

The court of law in India are highly influenced by RSS agenda under patronage of present regime, this is the trail of the conception who has killed the most famous democratic nonviolent Leader Mohandas Karam Chand Gandhi, who was the torch bearer of the same aspects as Yasin Malik and his clans are demanding and exercising the virtues practically endorsing the evidence.

The trends and traditions being innovated in the India are promoting the violence and limiting the political spaces for all the stakeholders of the conflict of Jammu Kashmir.

The UN charter and modalities of this issue guarantee the people of Jammu Kashmir in view of the right of self-determination accepted by governments of Pakistan and India under patronage of United Nation. So, how a troch bearer can be a guilty who demands this in line with the accredited methodologies.

We demand for the provisioning of the patronage of the UN and world community to resolve the conflict of Jammu Kashmir to save humanity and our forthcoming generations.

The conflict to be treated purely on humanity criteria not on the boarder issue between India and Pakistan.