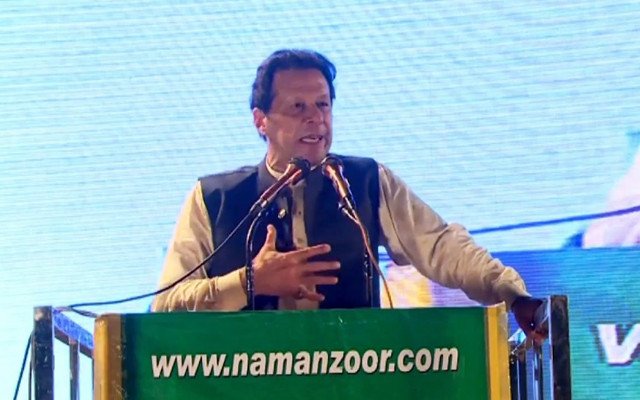 Rawalpindi: Former prime minister and Pakistan Tehreek-e-Insaf (PTI) Chairman Imran Khan on Sunday asked the “neutrals” why he was ousted through a ‘foreign-funded’ vote of no-confidence in parliament, saying that his only crime is that he has not accepted the “imported” government.

“Now Pemra is also in the game. What has Imran khan done? His only crime is that he is not accepting this imported government,” he said while addressing a public gathering at Liaquat Bagh in Rawalpindi.

Imran revealed that people who come to his residence to support him get calls from agencies, asking why they were there. “I want to ask whether you are neutral or not. If not then why are you damaging this country so much? Why do you want to stand with these people (the current government)? Do you think the nation will believe these people who have been looting this nation for the past 30 years,” he questioned.

informed that they had orders to do so. “It means they were under pressure from the neutrals,” he added.

Imran said that the chief election commissioner is giving all his verdicts against PTI as they wanted to disqualify him but when they seek information they get replies that they are under pressure from the “boots”.

“Now in Shahbaz Gill’s case, police say they are under pressure… whatever is happening in Pakistan will be blamed on you,” he said while addressing the “neutrals”.

He said whatever is being planned including his disqualification will damage Pakistan. “PTI is the only federal party in Pakistan right now. PTI has the power to unite. Army alone cannot keep a country united… political parties do that. If you weaken PTI you will weaken the country,” he added.

The former premier said that if PTI is pushed against the wall, the country will face a situation similar to Sri Lanka. “If we step aside who will stop these people from making the current situation even worse in the country? There is only one way out and that is free and transparent elections,” he added.

He said that a plan has been made to systematically suppress PTI, adding that they are trying to make an example out of Shahbaz Gill. “He was abducted, stripped naked and beaten… we were told by our lawyers what they did to him,” he added.

Imran said that he did not want to end his May 25 rally but he did so anyway to avoid bloodshed in the country. “I will not rest until I give real freedom to my people.”

I am telling all institutions to stop if you can… see Imran Khan is coming, Sheikh Rashid