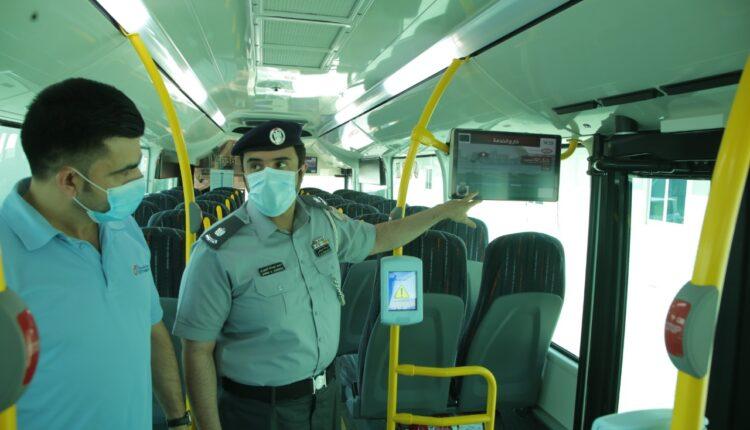 The Traffic and Patrols Directorate in the Central Operations Sector of the Abu Dhabi Police has begun activating digital awareness through the screens of public transport buses of the Department of Municipalities and Transport in Abu Dhabi, which roam the streets of the capital, Al Ain and Al Dhafra.

Brigadier General Mohammed Dhahi Al Himiri, Director of the Traffic and Patrols Directorate, stressed that the use of public transport bus screens is a continuation of the joint cooperation between the Abu Dhabi Police General Command and the Department of Municipalities and Transport in order to enhance awareness to reduce traffic accidents, enhance public safety, and maintain security and stability gains.

He explained that awareness-raising via screens is provided to various communities and in several languages, including English and Urdu, to ensure that the awareness message reaches the largest segment of society, pointing to the importance of cooperation between various parties, which contributes to increasing compliance with traffic laws and regulations and participating in introducing the basic axes of the strategic plan for traffic safety and anticipating Traffic future.

He stated that the use of public transport bus screens is one of the important means in the field of traffic awareness, especially with its use by a large number of users, as the size of the bus helps in spreading awareness advertisements in a clear and direct way for all.

For his part, Major Ahmed Abdullah Al Muhairi, Director of the Public Relations Branch at the Traffic and Patrols Directorate, explained that the Directorate is keen on diversifying the use of traffic awareness methods, in addition to field visits to schools and universities, and benefiting from various means of communication such as screens for public transport buses and others within the continuous endeavors to consolidate the traffic culture and its implications in the community.
He stated that the screens of public transport buses included awareness of safety procedures when using bicycles or electric bikes by using them in the authorized places, and they were presented in several languages, including Arabic, English and Urdu, in continuation of the efforts of Abu Dhabi Police to secure the safety of bicycle users and protect them from dangers.