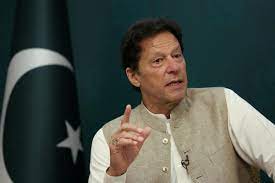 Pakistan Tehreek-e-Insaf (PTI) chief Imran Khan said on Saturday that the debates being held on social media currently were more of a “course correction, rather than conspiracies”.

The former premier’s remarks came during a session held with digital media influencers. Imran said the public was standing with him, adding that with colossal support from the public comes great responsibility as well.

While holding a Q&A, he said social media was not showing any conspiracies but only a trend of course correction.

Emphasizing his growing public support, Khan said: “If I want to shut down Islamabad, I can do that easily. However, that will be my final step and I do not wish to go that far.”

Regarding the country’s financial crisis, Khan turned his guns towards Prime Minister Shehbaz Sharif, and said if the premier was serious he should bring his brother Nawaz Sharif’s wealth worth billions back to Pakistan.

The PTI supremo stressed on taking thoughtful decisions to save the country from economic loss.

Commenting on events leading up to the formation of the current Punjab government, Khan said the purpose was to get early elections and to oust PML-N leader Hamza Shahbaz from the chief minister’s office.

Furthermore, the ex-prime minister touched on the subject of his chief of staff Shahbaz Gill’s arrest on sedition charges, saying his remarks were the same as the ones made by the judges in the Asfar Khan case.

“So will the judges be arrested too now?” he asked.

He also attacked PML-N leader Uzma Bukhari, saying she should turn her husband Zahid Bukhari in. “Whatever information they are seeking from Shahbaz Gill, they can easily get that from Uzma’s husband,” he said.

During the meeting, he also discussed the controversy of the hateful social media campaign on the Lasbela copter crash martyrs, saying his party was dragged into the debacle deliberately.