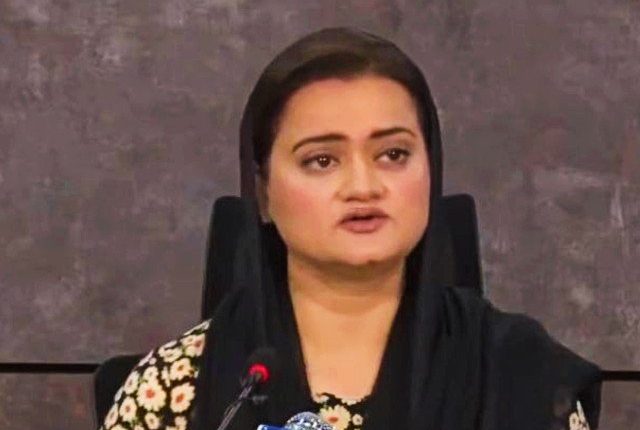 Information and Broadcasting Minister Marriyum Aurangzeb on Saturday said that a graphic video shared by Pakistan Tehreek-e-Insaf (PTI) leaders was “fake” and being used as a “ploy to raise false narratives in a bid to distract from PTI leader Shahbaz Gill’s controversial statement”.

During a press conference in Islamabad, she also shared a ‘recent video’ purportedly showing Gill standing up and looking healthy despite claims made by former prime minister Imran Khan and other PTI leaders that he was tortured and sexually abused.

“Shahbaz Gill has not been tortured and only fake propaganda is being spread in this regard. When he (Gill) comes in front of the camera, he starts acting,” she said.

Marriyum said that a video of a rapist in Chakwal, who was tortured by the locals after he sexually assaulted a child, is being attributed to Gill.

“They are only playing one half of the video and saying that it is Shahbaz Gill’s video and he has been subjected to sexual violence. Playing fake videos and pictures falls under cybercrime. Efforts are being made to connect this propaganda with freedom of speech,” she added.

The information minister said that an inquiry is being conducted on court’s order and all the evidence will be presented in front of the media by the interior minister soon.

She lashed out at the misbehaviour being conducted on social media on the pretext of the alleged fake video of Gill.

“This narrative was initiated by Imran Khan and his aim is to change the story entirely. He wants to change the scenario after he was bashed for dirty and vile campaign against the martyrs of the Lasbela helicopter which was followed by trolls of PTI caught,” she added.

The minister said that Gill used platform of a private TV channel and gave scripted beeper at the request of Imran Khan. “Their aim is to change the story of what Gill has done on the orders of his party chief,” she added.

Marriyum said that PTI’s ‘entire propaganda machine’ is being used to spread fake news. “The fact is Gill gave a call for mutiny… he breached the red lines given in the Constitution,” she added.

She said a case was lodged against the PTI leader, he was arrested for his controversial remarks and an investigation is underway.

Marriyum further said that the government was against torture on anyone but fake propaganda will not be tolerated.

Meanwhile, PTI leaders have provided ‘evidence’ of the torture on Shahbaz Gill to Islamabad Police. The evidence was handed over to the capital police by PTI leaders including Fawad Chaudhry, Shireen Mazari, Ali Nawaz Awan and others.

Islamabad Police had published an advertisement seeking evidence of torture on Gill or statement from the public.

It termed the reports stating torture on PTI leader as false, saying that if anyone has any proof it should be provided to the police. It urged the public not to become a part of any false campaign.

The police said that investigation was underway regarding the reports of violence on court orders. “The police department works to restore law and order and action will be taken against those who defame police as an institution,” it warned.

Tehreek Insaf all set to take out rally in Capital