Dubai property rents: where they rose and fell in Q2 2022 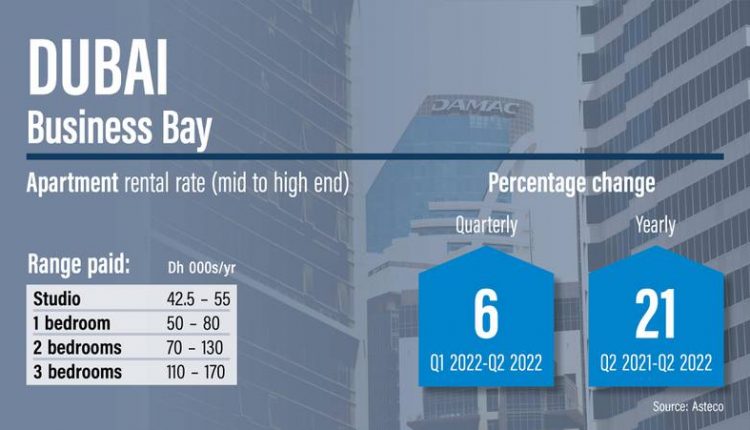 What was the general market movement in Dubai in the first quarter?

Rental rates in Dubai continued to rise across all areas from April to June as the momentum of the past year showed little sign of slowing.

Average rents for apartments rose 4 per cent from the first quarter, while villa rents increased 6 per cent during the period, property consultancy Asteco said. Rental growth on an annual basis stood at 15 per cent on average for apartments and 23 per cent for villas. 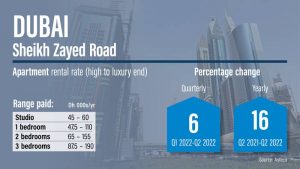 In a similar trend to the early days of the coronavirus pandemic, demand for villas and town houses with outdoor areas remained strong, and high quality apartments in prominent neighborhoods also recorded a rise in interest, along with those close to the Expo 2020 site. 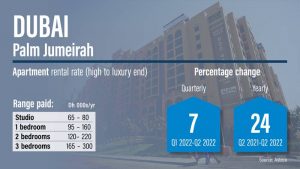 “Secondary locations with good community facilities such as those surrounding the Expo 2020 site (along the E311 and E611 corridor) saw an increase in demand and performance, both for residential and commercial activities,” Asteco said in its second quarter market report.

“In fact, the positive benefits of Expo 2020, including infrastructure upgrades and the repurposing of the site, will no doubt be felt across a wide range of sectors for years to come (‘the Expo effect’).” 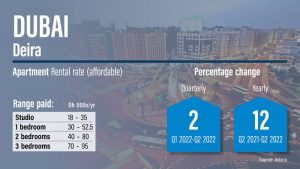 It expects rental rates to “remain elevated” for the rest of the year, but growth is predicted to slow amid an oversupply of units.

Broker CBRE recorded a rise in rents close to that recorded by Asteco — 21.2 per cent on average annually for apartments and 24.7 per cent for villas.

What about supply of new units?

A series of new projects was launched during the first half of the year amid renewed optimism in the market, according to Asteco.

It said apartment supply picked up from 6,000 new units in the first quarter to 7,000 in the second quarter, while villa handovers doubled to 520.

“In many cases, projects have been sold with construction milestone linked (buyer) payment plans, incentivising developers to complete projects on, or ahead of schedule,” Asteco said. 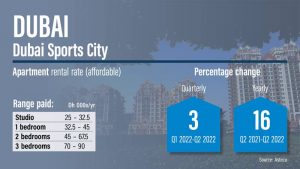 “No doubt, developers are also keen to reinvest their profits into further project launches as soon as possible to capitalize on prevailing market conditions.”

It said that with residential transaction volume data for Dubai showing a 39 per cent annual jump in the second quarter, “it’s unsurprising that developers are rushing to complete existing projects and are looking to release new off-plan ones”.

How are Dubai property prices performing?

They’ve been soaring for some time now, especially in prime areas.

Average residential property prices increased 10 per cent in the year to June, with apartment prices nearly 9 per cent higher on average and villa prices increasing 19 per cent, CBRE said in its latest Dubai market report. 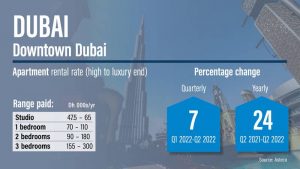 The likes of Palm Jumeirah, Emirates Hills, District One and Dubai Hills all recorded increases of more than 4 per cent month-on-month in June.

The rebound from the coronavirus-induced slowdown has been accelerated by oil prices and the UAE’s effective vaccination programme, and an expansion of the 10-year Golden Visa programme.

Asteco reported an average 4 per cent increase each for apartment and villa prices during the quarter, and 20 per cent and 26 per cent, respectively, annually.

“There has also been a marked increase in high-end/luxury residential unit sales,” Asteco said.

“In fact, according to the recent Henley Global Citizens Report (2022), 4,000 high-net-worth individuals are expected to relocate to the UAE this year due to the advanced economic, social, legal and regulatory framework facilitating business, investment and residency.” 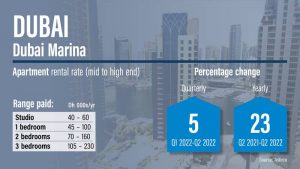 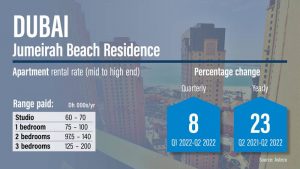