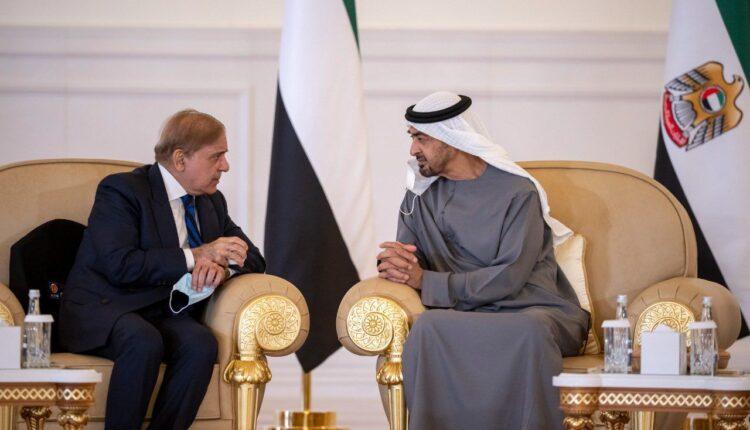 Prime Minister Muhammad Shehbaz Sharif visited the UAE, today, to offer condolences on the demise of His Highness Sheikh Khalifa bin Zayed Al-Nahyan, President of the United Arab Emirates, who passed away on 13 May 2022.

During his meeting with the newly-elected President of the UAE, His Highness Sheikh Mohamed bin Zayed Al-Nahyan, the Prime Minister expressed deepest condolences on behalf of the Government and people of Pakistan. The members of the Royal family were also present during the meeting.
The Prime Minister conveyed that the Pakistani nation fully shared the grief and sorrow of their Emirati brethren and stood by them in this difficult time. He offered prayers for His Highness’ departed soul.
Prime Minister Shehbaz Sharif stated that Pakistan had lost a sincere friend and trusted partner in the passing away of His Highness Sheikh Khalifa. He lauded his invaluable contributions in strengthening bilateral ties between the two countries, for which he will always be remembered by the people of Pakistan.

The Prime Minister paid tributes HH Khalifa bin Zayed’s dynamic leadership under which the UAE transformed into a major economic powerhouse. He affirmed that monumental legacy of His Highness would continue to inspire the generations of Emiratis.
The Prime Minister also conveyed best wishes to His Highness Sheikh Mohamed bin Zayed Al-Nahyan upon assuming his responsibilities as the new President of the UAE. He expressed the confidence that the newly-elected President would take the UAE to new heights of development and progress in the years to come.
His Highness Sheikh Mohamed conveyed sincere gratitude to the Prime Minister and the leadership and people of Pakistan for their solidarity during the hour of grief.
The two leaders affirmed their shared commitment to further deepen the Pakistan-UAE relationship in all dimensions.
Pakistan and the UAE enjoy strong fraternal ties, rooted deep in common faith and shared history and cultural values. Pakistan is committed to further strengthening and expanding existing strong bilateral cooperation with the UAE, in particular the trade, economic and investment dimensions.